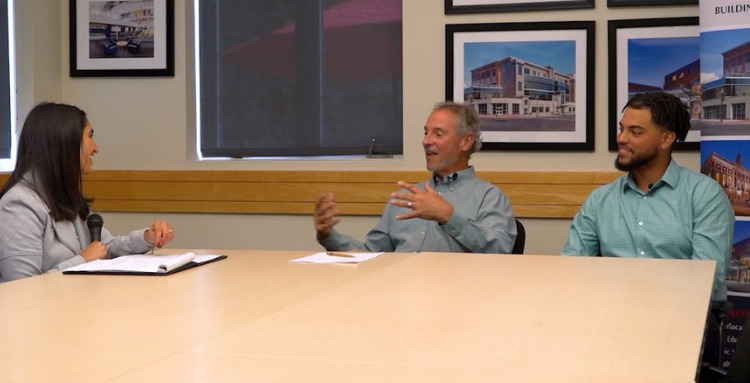 Fraioli, who was born and raised in New Britain, started as an apprentice carpenter himself with Downes 42 years ago.

“It allows us the ability to learn and have a respect for other people’s careers and what they do,” Fraioli said.

Feliciano is a recent graduate of New Britain High School, who learned about Downes after the company gave a presentation in his construction class.

“It really stood out to me and caught my eye,” Feliciano said. “They explained how construction touches everything.

“They were explaining how we don’t start with the walls, but the foundation. I took that not just literally but metaphorically because you have to build that base especially when you’re young right out of high school build that base and work your way up.”

He became an apprentice after connecting with the company and shadowing a superintendent at Downes.

Downes’ four-year apprenticeship plan is a paid program with hands-on and classroom learning. At the end of the four years, an apprentice becomes a journeyperson in their trade.

Feliciano said that they reach out to school districts wherever they have a construction project to engage the students.

That outreach began with high school students, but the company is looking to get into middle schools as well, to help plant the seed and show students different opportunities.

Fraioli said their outreach in schools is a win-win for both the company and the students because it helps recruit new talent, but also shows students who may not be interested in going to college that there are different and rewarding career opportunities in construction.

“Our main focus is to make sure that every student before they graduate is to have a career plan, whether it’s college or career oriented.”

Feliciano said he’s grateful for the opportunity at Downes because he didn’t know what was next after high school.

“I didn’t feel as if college was it for me,” Feliciano said. “So taking this opportunity opened my eyes to a lot of other opportunities along the way.”