Connecticut's economic outlook remains basically unchanged from 12 months ago, although businesses are concerned about several state legislative proposals according to a new survey released March 14.

CBIA's 2018 Fourth Quarter Economic and Credit Availability Survey found nearly half (46%) of respondents expect business conditions to remain stable, the same percentage as in the fourth quarter of 2017. 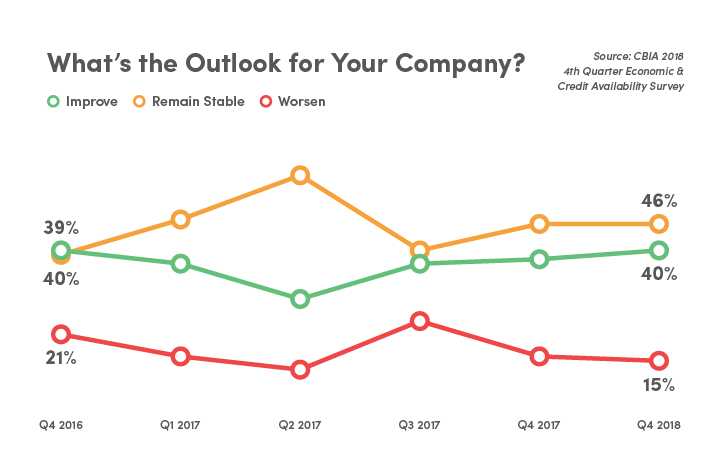 There is more optimism when it comes to hiring.

Fifty-eight percent of respondents expect employment levels to remain stable, up two percentage points from last year, while 34% anticipate their workforce  to grow, either somewhat or significantly, compared to 28%.

Ten percent of business owners expect to reduce the size of their workforce, compared with 17% in the fourth quarter of 2017.

Ninety percent said credit availability is not a problem for their firm and 35% reported that they have used financing over the last three months to meet credit needs. Nearly two-thirds (59%) of respondents feel the lending climate in Connecticut is average, while 10% say it is excellent, and 15% report it as good.

Conversely, 12% consider it fair, while 4% feel its poor.

The top types of financing that businesses need include working capital (28%), capital to buy machinery and equipment (14%), and capital to expand their plant or office (7%).

Nineteen percent say paid leave will have a moderate impact, 6% expect no impact, and 4% were unsure.

A key legislative committee last month approved two identical bills mandating that all private sector employers offer up to 12 weeks annual leave at 100% of salary, capped at $1,000 per week.

As proposed, the program will be funded through an employee payroll tax, while employers are required to continue paying benefits for workers on leave.

Eighty-eight percent of businesses surveyed in the fourth quarter employ less than 100 employees.

Many of those small employers said the paid FMLA mandate will impose significant financial and operational hardship.

"Not only would we have to bear the cost of benefits, we also have to hire a temporary worker to do their job," one small business owner responded.

"We don't have redundancy for most jobs. The time and expense of training a replacement and then letting them go when the original worker returned would be impossible."

Survey respondents were evenly split when asked about raising the state's hourly minimum wage to $15—42% expect a significant or moderate impact, 41% project no impact.

When asked how they would mitigate that impact, surveyed businesses offered a range of responses, including making greater investments in automation and reducing workforce levels, hours, or benefits.

"This might bar us from bringing in unskilled, young workers and training them," responded one small business owner. "Young interns or high school age employees do not bring enough skill, however we pay them while we train them over six months to a year."

Replied another: "We start most of our employees at $15 now, so this would have a minor effect on us. Reducing the cost of living is the only thing that will keep workers in this state."

With Connecticut facing a two-year, $3.7 billion budget deficit, business leaders are also concerned about the prospect of tax hikes.

When asked what could happen if significant tax increases were enacted, survey respondents said:

CBIA's 2018 Fourth Quarter Economic and Credit Availability Survey was emailed to businesses in mid-January and early February 2018 with an 6.3% response rate and a +/-7.5% margin of error.