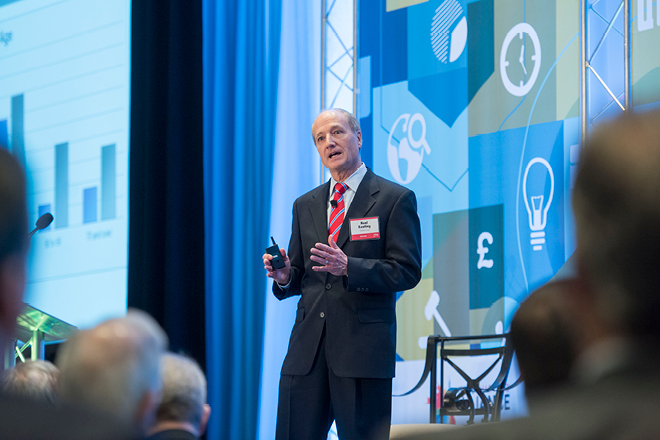 Aerospace leader Neal Keating’s message about Connecticut’s economic prospects began with a salute to the past and a loud call to the future.
“It’s important to celebrate Connecticut’s long history of innovation and entrepreneurship,” the Kaman Corporation chairman, president, and CEO told 450 business leaders January 4 in Hartford.

“Now it’s time to recapture that competitive edge. We have to turn Connecticut into the economic engine it once was.
“If you think about the world today, realize that a century before people talked about Silicon Valley, people talked about the Connecticut Valley.”
Speaking at the annual Economic Summit + Outlook hosted by CBIA and the MetroHartford Alliance, Keating identified three key areas state policymakers must address—workforce development, business costs, and fiscal stability.
“Number one, we need to expand and invest in the Connecticut workforce,” Keating said.
“I was asked a question this morning, ‘How’s business?’ I said it could be better if we could hire the skilled employees we need in Connecticut.”

Keating acknowledged that although one of Connecticut’s major strengths has always been its highly skilled workforce, demographic trends are now threatening that reputation.
“GDP in Connecticut is based on two things—population and productivity,” said Keating. “Those two factors are what will drive our growth here, but I’m worried about both.
“Workforce, our crown jewel, is under threat. We’re losing our young people, and our population is aging.”
Keating noted that the number of Connecticut citizens under the age of 20 and in the 40–49 age group—one of the groups, along with the 30–39 cohort, “where you really build your companies”—is down 175,000 people.

Workforce, our crown jewel, is under threat. We're losing our young people, and our population is aging.

For its part, Kaman has made those investments, pumping more than $100 million into Connecticut in recent years, including investments in advanced robotics and automation.
But investments by Kaman—and many other Connecticut companies—"go far beyond our businesses," said Keating, noting the myriad charitable contributions his firm makes every year, as well as the work its employees do in their communities.
"What I think is most important [is] the commitment our employees make to coaching teams, to mentoring younger people, to participating in their churches and schools," he said.
"And again, we're not alone in doing that. And it's underscored the fabric of our cities, our state, and our towns for decades."
For business investment in Connecticut and its communities to expand, however, policymakers must work to bring down business costs and restructure tax policy to promote economic growth, Keating added.
He called for lawmakers to work toward modest improvements that would take Connecticut to the median when it comes to state rankings for business costs and tax policy.

Connecticut currently ranks 47th and 48th, respectively, in those categories, according to a 2018 PwC Aerospace Manufacturing Attractiveness study Keating cited.
"We need to reduce the cost of doing business," said Keating.
"We all want to be committed to the state of Connecticut, and we're also committed to our companies and our employees and making the right decisions on where to locate manufacturing.
"We need to have a lower cost of business, so we can continue to grow in Connecticut."

The complexity and structure of our corporate tax policies in Connecticut really don't incent long-term investment.

As part of that effort, he said, policymakers must take a hard look at the way the complexity of some of the state's tax policies impacts Connecticut's attractiveness to business investment.
"The complexity and structure of our corporate tax policies in Connecticut really don't incent long-term investment if you're in a cyclical business," Keating said.
"Aerospace is in a cyclical high. It comes down. We've seen it before. And the way our tax policy is structured really penalizes those companies that have some of those natural cycles."

To illustrate how policy affects the economy, Keating compared the growth trajectories of Connecticut and Florida, one of our main competitor states in the aerospace industry.
"Their [manufacturing] decline was worse than we experienced," said Keating, "a lot of that driven by the shutdown of the space program."
But, he noted, since the low point in manufacturing jobs in 2010, "while we've recovered about 87% of the jobs, Florida has now exceeded their prior employment levels."
"I talked about our GDP being down 26%; theirs is up 31%," he said. "These are policy decisions that are being made and driving growth and jobs—someplace else.
"I think we have a responsibility to our employees, to our citizens, and to our children to change some of the policy decisions that have been driving this extraordinary differential in job growth."

Keating also believes the state's ongoing fiscal problems are a strong disincentive to business investment and job growth.
The problem is a lack of predictability.
"We need to have predictability," he said.
"When you open the paper at least every other day, and you hear about large looming deficits, and you try to plan for a five- or 10-year period for your employees and your company, that's a real issue when there's uncertainty.
"We have to change this—I hate the word 'narrative'—we have to change the facts that drive the stories."

In addition to making concrete policy adjustments, Keating suggested some state policymakers need to change the tenor of the conversation about business.
"I would like to not be the enemy," said Keating.
"Why is it that the companies that provide the jobs we need so badly are the enemy?
"We grew up in a rooming house, and we were driven, in a positive way, to have a better life than our parents.

"I actually wanted to be successful. It was important to me to prove to my parents that they did their job. So you tend to work hard.
"And [I've been] blessed with the opportunity to work alongside 5,500 talented employees. [But] so often you open the paper, and you're slammed for being a CEO.
"I think…communities, families, businesses, and government all have to work together—whether you're a lay person, a CEO, the mayor, the governor, or that machinist or mechanic who works for Kaman turning out great Connecticut products every day.
"That's what I'd like to see."
Tags:
Previous Article
Next Article