CBIA’s first-ever cybersecurity survey of Connecticut companies was designed to both raise awareness of the issues and challenges and better understand the level of preparedness within the state’s business community.
We wanted to know what companies were doing to: 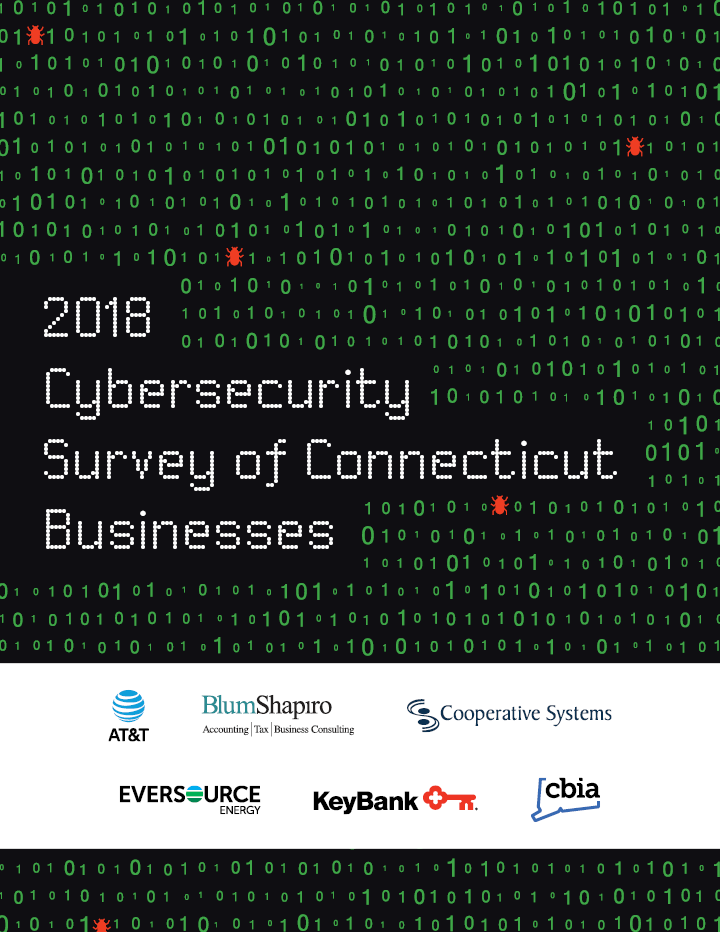 Given the increasing number of attacks on businesses of all types and sizes, CBIA believes it is critical to gauge the levels of preparedness and risk mitigation among Connecticut firms.
Nonetheless, cybersecurity is a sensitive subject, which presents challenges with surveying organizations.
While this survey saw lower response rates than our typical surveys on economic and public policy issues, there is clear evidence that businesses must evolve much faster in understanding and managing cybersecurity threats.

In the last two years, 24% of Connecticut companies suffered data breaches or cyberattacks. While 72% reported no attacks, 4% of surveyed businesses say they are unsure whether their firms were compromised.
Malware, including viruses, spyware, and other unwanted software, drove almost half (48%) of those reported attacks, while phishing—using fraudulent emails or texts to obtain confidential company or personal information—accounted for 30%. Man-in-the-middle attacks—where hackers intercept and compromise communication between two systems—were responsible for 19% of cyberattacks on Connecticut companies.
Four percent were generated by denial of service attacks, where hackers target networks with a flood of requests designed to slow down or crash servers, disrupting business operations.
What are the sources of these attacks?
Sixty-two percent of companies report hackers were responsible and 12% blame employees. What’s most telling is that 26% of companies are unsure who is behind the attacks.
Over a third of companies (38%) believe cyber risks are increasing, 36% say the threat levels remain the same, 23% were unsure, and just 3% see a decline in overall threats.
Lack of knowledge and/or awareness is a constant theme throughout this survey.
For instance, when asked to identify the greatest known cybersecurity threat to their company, 30% said they were unsure and 18% cited a lack of general knowledge. Twenty-four percent identified an inability to recognize phishing or malware attacks, 8% nominated poor mobile device security awareness, 5% have difficulty identifying suspicious network traffic, and another 5% pointed to insufficient third-party risk management resources.
Who is compromised when a company comes under attack?
Multiple constituencies, say surveyed companies, with 65% citing clients and customers, 65% employees, 11% vendors, and 6% subsidiaries. Nineteen percent said they were unsure.
Significantly, just 20% of surveyed companies have estimated the fiscal impact of a cyberattack. Seventy-one percent have not and 9% are unsure.

A minority—18%—of surveyed companies have an annual budget dedicated to their cybersecurity efforts.
Twenty-three percent plan on implementing a budget line for cybersecurity management in the near future, 53% have no plans, and 24% are uncertain.
However, more than half (58%) report that spending on cybersecurity personnel and/or resources increased over the last 12 months, while 42% said it stayed the same.
No companies said they decreased their spending in this area. Just 14% of surveyed companies manage their information technology functions solely through dedicated internal staff, while 32% use the services of managed service providers or consultants. Over half (52%) rely on a mix of internal and external resources.
Of those with internal IT staff, 25% have employees dedicated to managing their cybersecurity efforts, with the number of employees ranging from one to 10 workers.
Three-quarters of all surveyed companies have contracts with external IT vendors, 22% do not, while 2% are unsure.
Most businesses—88%—that contract with external IT vendors report those vendors are involved in their company’s cybersecurity management efforts.
Only 44% of all surveyed companies say they actively manage their IT security functions, 29% do not, and 27% are unsure.
Less than half of all companies (47%) maintain a physical operations center that houses their websites, data centers, and network servers to allow for monitoring and breach protection.

Few companies report high degrees of confidence with their risk management operations.
Just a quarter (26%) say they are very confident about their network security operations, while68% are somewhat confident. Four percent are not confident and 3% are unsure.
Only 22% believe their company’s networks are highly secure, with 68% describing their networks as moderately secure. Six percent say their networks are insecure and 4% are unsure.
The patterns are similar across incident management, access controls, and software security.
For instance, 14% of surveyed companies are very confident about their incident management plans and activities, 63% are somewhat confident, 12% have no confidence, and 12% are uncertain.
Half the companies we surveyed are somewhat confident in their management of software security patching and updates.
Based on their industry sector, Connecticut companies must comply with a range of state, federal, or industry laws, regulations, and standards governing privacy, data security, and breach notification. Twenty-seven percent of companies represented in this survey say they are required to comply with state and federal data privacy and breach notification requirements.
Almost a third (32%) must comply with the 1996 federal Health Insurance Portability and Accountability Act, which governs companies operating in the healthcare sector.
HIPAA’s administrative safeguards provisions require covered entities to perform risk analysis as part of their security management processes.
Thirteen percent of businesses report falling under the 2006 Payment Card Industry Data Security Standard, which requires all companies that accept, process, store, or transmit credit card information to maintain a secure environment.
PCC DSS is administered by the Payment Card Industry Security Standards Council, an independent organization created by the major payment card brands. PCI SSC can fine banks $5,000 to $100,000 per month for violations, with banks often likely to pass those penalties to non-compliant merchants.
What challenges do companies face in managing cyber risks?
For 40%, it’s a lack of financial resources, while 26% cite a lack of expertise. Time constraints challenge 12% of companies, as does a lack of information, while 3% cite personnel shortages.

Less than half of surveyed companies (45%) conduct risk analysis audits or tests, 40% do not, and 15% are unsure.
Of those that conduct risk testing, 18% are uncertain about the frequency of those tests. Only 3% run weekly tests, 15% monthly, 21% twice a year, 18% annually, and 12% say they run tests when needed or after an incident.
Almost half (49%) of companies do not conduct vulnerability testing, while 32% run those tests and 19% are unsure.
In terms of frequency, 8% run weekly vulnerability tests, 21% do so monthly, 21% twice a year, 8% annually, and 17% as needed or following an incident. Eight percent are unsure.
Connecticut companies are less likely to run penetration tests, with 54% reporting they do not use this tool to assess the strengths and weakness of their computer systems and networks.

Twenty-two percent utilize penetration testing and 24% are unsure.
Companies that run penetration tests are most likely to do it semi-annually or annually (56%).
Less than half (47%) of all companies provide cybersecurity training for employees, with 49% reporting they offer no training programs, and 4% are unsure. Of those that provide employee training, only 58% say it is mandatory.
Thirty-four percent conduct annual training, 21% when needed or following an incident, 16% hold sessions based on an outside provider’s availability, 13% run quarterly programs, 13% semi-annually, and 3% monthly.
Group sessions are the preferred format for 52% of those who offer training, while 17% provide individual sessions and 27% rely on webinars.
Is that training effective? Eighty-four percent say yes, while 16% are unsure.

We asked business leaders if their firms have a disaster recovery or business continuity plan. Encouragingly, 73% do have such a plan, while 18% do not and 9% are uncertain.
Most of those firms (52%) update their plan annually, with 14% reviewing and revising it when needed or after an incident. Thirteen percent update their plan twice a year, 2% monthly, and 2% weekly.
Eighteen percent are unsure how often their disaster recovery or business continuity plan is updated.
Those plans are tested annually by 29% of firms, with 21% testing when needed or following an incident, 14% semi-annually, 7% weekly, and 4% monthly. Twenty percent are unsure of the frequency of their testing.

Almost all surveyed companies (96%) have a data backup plan.
Only a third of companies (33%) say they are required to notify vendors, customers, and/or subsidiaries following a cyberattack or data breach. Forty-seven percent have no requirement and 20% are unsure of their notification responsibilities.
Just 22% have an incident response plan in place for vendors, customers, and subsidiary operations, with 55% having no plan, and 22% unsure. For those with such a plan, 47% have tested it, 47% have not, and6% are uncertain.
We also asked companies if they set aside funds to respond to attacks. For example, paying hackers to resolve ransomware attacks—where malware is used to lock user computer files—or engaging outside legal help.
While almost three-quarters (74%) do not set aside emergency funds, 18% of companies do and 8% are unsure.
Just over half (51%) of surveyed companies also have insurance policies to cover damages caused by cyberattacks. Forty-four percent do not carry cyber insurance and 5% are uncertain.
Of those who not carry a specific policy, 42% are unaware of cyber insurance and how it works, 21% are considering coverage, 15% say policies are too expensive, 12% are confident in their company’s safeguards, and 9% say policies are not worth the cost.
Most of the companies (54%) carrying cyber insurance increased their policy coverage in the last two years.

This was CBIA’s first survey on the topic of cybersecurity. As we noted earlier, this is a sensitive issue, and that impacted the overall response rate—3.4%, well below what we usually see with other surveys on economic and public policy issues.
Obviously, cybersecurity is a topic that worries, even scares, many business leaders.
Based on the results of this survey, while many companies are tackling the issues and are implementing appropriate measures, it is clear there is a great deal of uncertainty, particularly among small businesses, which are most vulnerable to threats.
There’s an obvious lack of knowledge about the issues and a lack of clarity among many business leaders about their own efforts to prepare, manage, and respond to this growing threat.

To think it's not going to happen to you is dangerous thinking.

Whether it's fear of the unknown, information gaps, inadequate fiscal or personnel resources, or a too-casual attitude, businesses small and large must acknowledge and understand the risks.
Any company is just one click away from an attack and the potential for significant financial, reputational, and legal exposure if they do not adapt, plan, and prepare.
As Art House, the state's Chief Cybersecurity Risk Officer says: "To think it's not going to happen to you is dangerous thinking. You have to assume that what's happening to everyone else, someday will happen to you."
Every company must have a thorough understanding of their current risk exposure. If you do not have enough in-house personnel resources, we encourage you to engage outside help.
While it may be difficult to assign appropriate financial resources, the risks of not taking appropriate action could potentially be far costlier—to your bottom line and your brand.
Implement layered security protections, building up appropriate defenses for servers, networks, workstations, and mobile devices.
Make sure you have a data back-up solution in place. Develop a disaster response or business continuity plan. Have a clear path to recovery should the worst happen.
Follow that with regular training and testing programs. And remember, your employees are your frontline defense against hackers.
The sooner businesses step up and evaluate their cyber defenses—hardening them as needed—and implementing regular employee training, the lower the chances of government stepping in with heavy-handed regulations.

In late 2017, CBIA mailed and emailed the Cybersecurity Survey of Connecticut Businesses to approximately 3,400 executives throughout the state.
We received 117 responses, for a response rate of 3.4% and a margin of error of +/-9.1%. All figures are rounded to the nearest whole number and may not total exactly 100%.
The survey was made possible through the generous support of AT&T, BlumShapiro, Cooperative Systems, Eversource, and KeyBank.