Overtime spending for Connecticut state employees increased by almost 14% through the second quarter of fiscal 2018.

The state Office of Fiscal Analysis’ latest quarterly report shows overtime spending hit $115.2 million in the first half of the year, a $13.9 million increase over the first six months of fiscal 2017. 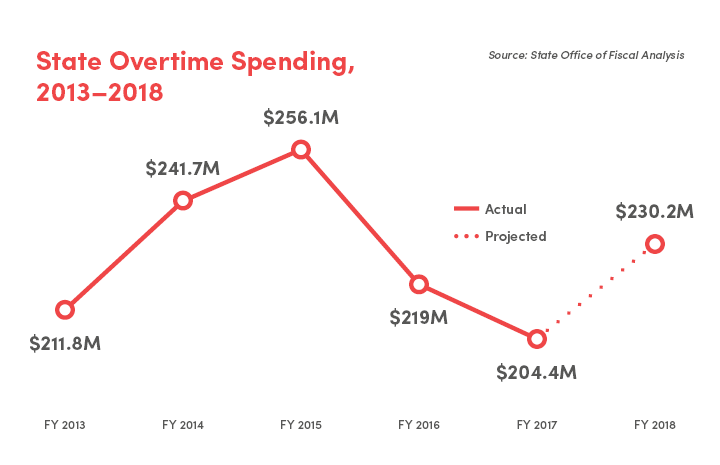 CBIA economist Pete Gioia says the state is on pace to exceed $230 million in overtime spending this year, a significant jump after costs fell to a six-year low of $204.4 million in 2017.”

Overtime spending is a significant issue for state government,” Gioia said. “That’s why the General Assembly demanded this report in the 2016 special session.

“We’re already facing a $220 million-plus deficit for this year and this surge in spending will further blow that out,” he said.

“And because overtime is allowed as a factor in calculating state employee pensions, the failure to curb spending drives up the state’s long-term liabilities.”

Five state agencies account for over 93% of all overtime spending. All five saw spending increases through the first half of this fiscal year.

At $6.6 million, the Department of Correction saw the biggest jump in dollar terms, while Department of Emergency Services and Public Protection overtime spending rose 28%, the largest percentage increase.

Claims Down, Spending Up

Outside the top five, all remaining agencies spent $7.1 million on overtime through the first two quarters, a 6.5% increase over the same period last year.

Spending rose for the first half of the fiscal year despite 422 fewer state employees claiming overtime.

DMHAS employees had the highest average payout through the first six months, with 2,153 workers averaging $12,201 in overtime.

One Connecticut State Library employee was paid $7,377 overtime in the first quarter of the year and $5,199 in the second quarter.