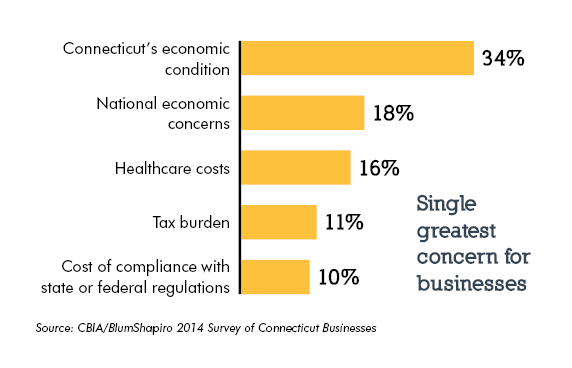 Connecticut business leaders say the state’s economic competitiveness is the single greatest challenge facing economic growth and job creation according to a new survey released today.
The 2014 Survey of Connecticut Businesses did reveal cautious optimism, with 35% of respondents saying their companies were growing, and 54% reporting they were “holding steady”.
Released today at The Connecticut Economy conference in Rocky Hill by the Connecticut Business & Industry Association and the accounting, tax, and consulting firm, BlumShapiro, the annual survey identifies issues and trends within the state’s economic, fiscal, and regulatory climates.
The state’s economy was the single biggest challenge for 34% of respondents in 2014, unchanged from last year’s survey findings. National economic concerns (18%), healthcare costs (16%), state and federal tax burdens (11%), and regulatory costs (10%) also were listed as major challenges.
Economic competitiveness
CBIA president and CEO John Rathgeber said today that those challenges and other areas hampering economic growth were the reason CBIA and dozens of other groups launched the CT20x17 campaign earlier this year, aimed at making Connecticut a top 20 state for business by 2017.
“Economic competitiveness is not just a business issue but one that touches every community, every neighborhood, and every family in Connecticut,” Rathgeber said. “A competitive economic climate means more jobs, more opportunity, and a brighter future for everyone in the state.
“We have tremendous assets and must continue to leverage them. At the same time, it’s critical we address those areas hampering economic growth, particularly the high cost of doing business, taxes, state budget deficits and long-term debt, red tape, and our aging transportation infrastructure.”
The survey found that more than one in five businesses is considering moving or shifting production to another state within the next five years, and 29% are considering expanding outside of Connecticut.
Policy priorities
When asked how lawmakers could improve economic competitiveness, 52% said reducing taxes should be the top priority, followed by additional regulatory reforms (24%), curbing government spending (11%), increased tax incentives (7%), and improving transportation infrastructure (6%).
UIL Holdings Corporation chairman and CEO Jim Torgerson, speaking at today’s conference, said national studies such as CNBC’s America’s Top States for Business rank Connecticut poorly for economic competitivness.
“Those rankings reflect policy decisions made over the last decade that have increased business costs and jeopardized jobs and opportunities for those who work and live here,” Torgerson said. “They reinforce the perception that Connecticut is not a good place to do business.
“It’s critical that we break that pattern and unlock Connecticut’s enormous potential. With the assets that we have in this state, we could–and should–be one of the best states in the country to do business.”
Barriers to growth
Other speakers, including DataCore Partners chief economist Don Klepper-Smith, said the CBIA/BlumShapiro survey highlighted barriers to growth that needed eliminating so the state’s struggling economy can grow.
“These results clearly show the need to improve our business climate,” Klepper-Smith said. “They reveal the real difficulties of trying to run a business here in the state.
“Needless to say, it’s a day-to-day challenge for most of my clients, given rising healthcare costs and the higher costs of state government, which are outpacing our ability to pay for it.”
Given Connecticut’s position as a high-cost state, innovation is critical to growth and profitability, with the survey finding that 46% of businesses added new products or services in the past year and almost a third (29%) investing in research and development.
Making investments
Technology was the greatest single investment for 27% of those surveyed, followed by employee training (23%), and property and facilities (23%).
Over the next two years, however, companies plan on making greater investments in training, with 28% indicating it will become a bigger priority.
The survey found that, through 2015, workforce demand will be concentrated on mid-level employees, with 33% of companies saying that was their biggest need, followed by entry-level (29%), line workers (28%), and managers (8%).
“Connecticut’s workforce is aging,” said Joseph Kask, office managing partner with BlumShapiro. “This, coupled with businesses struggling to find qualified workers, highlights the need for our state to continue investing in training and development programs while creating an environment that retains and attracts new talent.”
‘Major election issue’
Torgerson called on business leaders to support the CT20x17 campaign, saying that they needed to ensure that the major issue of the 2014 elections was ‘making Connecticut a top state for business, jobs, and economic growth.’
“It’s about responsibility, and those of us in this room have an important role to play,” he said. “As business leaders, as leaders in our community, we have a responsibility to our employees, to our clients, to our family, friends, and neighbors–a responsibility to get involved.
“If we want responsible government; if we want accountability from those we elect to represent us, then it starts with us. If we want better, if we expect more, then it’s not enough to demand it; we must get more involved.”