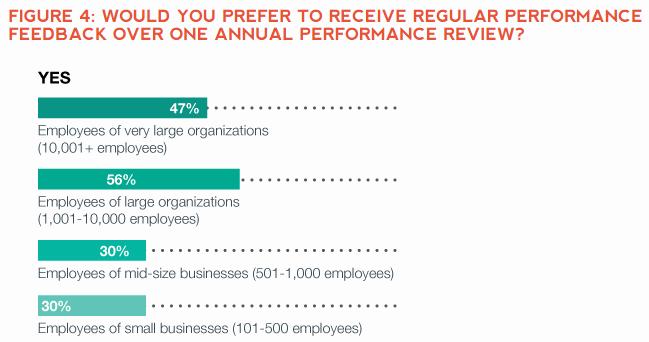 As organizations begin to trend away from annual performance reviews, new research finds that U.S. workers are divided as to whether to save or scrap the system.
Only half of U.S. workers polled for Eagle Hill Consulting’s national survey believe it is a good idea to eliminate the formal system.

About half of surveyed workers wanted to eliminate the formal performance appraisal system.

Some 54% of those polled said they were pleased with their last performance review, and 65% believe their last review was an accurate reflection of their performance.
The findings are detailed in a new Eagle Hill whitepaper, The Annual Performance Review: Old-School or Timeless Tool?
The research is based on a recent poll of 1,600 professionals across a range of industries and careers.
Melissa Jezior, president and CEO of Eagle Hill says, “Companies should look closely at these findings as they consider whether to refine or replace their performance management system.”
She says it’s trendy for companies to move away from the formal annual review process to help save time and money while increasing performance.
“But, the annual performance system has to be replaced with something—and that something probably would take the form of formal and informal feedback sessions. This is problematic for companies that lack an open and regular feedback culture,” Jezior explains.
Only about half of respondents say they currently receive regular feedback from supervisors on their performance.
“Our research sheds light on why employees are wary to move away from annual performance reviews,” Jezior says.
“Generally, employees feel the system works, and perhaps may worry they won’t get feedback needed for career growth or they will not have input on salaries and bonuses.”

Generally, employees feel the system works, and perhaps may worry they won't get feedback needed for career growth or they will not have input on salaries and bonuses.

She says that companies should proceed with caution and solicit employee input before overhauling the system.
"It's critically important to engage employees in any change, be crystal clear about how a new system would work and the impact on promotions and compensation."
Self-Analysis Questions
Based on the findings, Eagle Hill developed the following five self-analysis questions employers should ask when considering a performance plan overhaul. Eagle Hill's related poll findings follow each question.
Tags:
Previous Article
Next Article