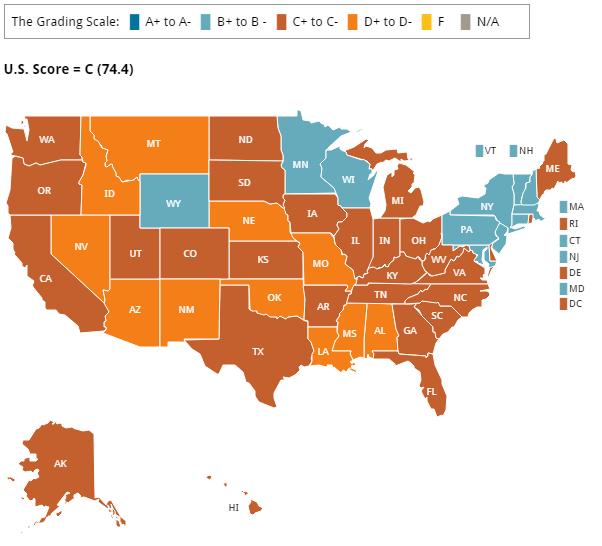 Connecticut public schools continue to be among the national leaders in quality, according to a national publication’s annual rankings.
Education Week just released its 2016 Quality Counts report, which used federal and state data to grade the 50 U.S. states in three categories: the Chance-for-Success Index, school finance, and the K-12 Achievement Index.

Connecticut received a B- overall, placing it in the top five states nationally.

Connecticut received a B- overall, placing it in the top five states nationally and topping the nation’s overall C score.
Connecticut and Minnesota tied for fourth nationwide with a B+ in the Chance-for-Success Index, which assesses the role of education in supporting positive outcomes in a person’s life from cradle to career.
We also scored a B+ in school finance category, which examines educational spending patterns and funds distribution.
Finally, Connecticut received a C grade in the K-12 Achievement Index, which assesses the performance of a state’s public schools against achievement levels and improvements over time.
While the publication’s ranking reflects well on the state overall, Connecticut continues to grapple with issues of equity in education, through both a longstanding achievement gap and legal questions around funding for poorer school districts.
CBIA continues to work at the legislative level to ensure all residents receive the education needed to contribute to Connecticut’s economic vitality.
Tags:
Previous Article
Next Article