After working for almost a year, the state Spending Cap Commission could not agree on recommendations to fully enforce the state’s constitutional spending cap.

Created in 2015 and charged with developing the definitions missing from the cap’s original language, the commission held meetings and five public hearings in each of Connecticut’s congressional districts throughout the past year to get public comment on what direction they should take. 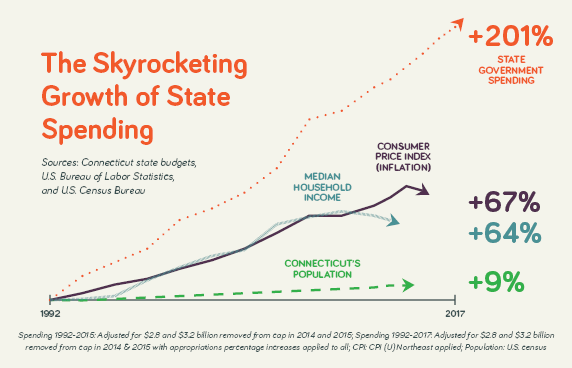 Government spending has soared 201% since the implementation of the state income tax.

CBIA and many other interested parties testified at those hearings, urging that the spending cap be comprehensive and conclusive as was originally intended.

The commission’s work revolved around setting clear and enforceable definitions of three key elements of the cap: increase in personal income, increase in inflation, and general budget expenditures.

While the group was able to reach consensus on the first two definitions, they were unable to agree on what qualifies as general budget expenditures to be included under the cap.

Debate centered on whether expenditures such as payments for bonds and other evidences of indebtedness, federal mandates, court orders, and grants to distressed municipalities should be covered by the cap.

Rather than provide a conclusive recommendation, the commission will send the General Assembly a summation of their agreements and disagreements, which can serve as the basis for further action by lawmakers during this legislative session.

Unlike routine legislation, which requires a simple majority vote to pass, establishing new definitions of the spending cap’s terms will require a three-fifths super-majority vote in both houses of the General Assembly.

In 1992, voters overwhelmingly approved the 28th amendment to the state constitution, which created a spending cap to keep the cost of state government within taxpayers’ means to afford it.

The cap was intended to offset the unpopular state income tax passed the previous year and to be a tool to keep most budget appropriations in line with actual personal income increases and inflation.

The spending cap is designed to be flexible when necessary; it exempts funds designated for debt service, grants to distressed municipalities, funding for the first year of a federal mandate or court order, and spending needed for emergencies declared by the governor (subject to 60% approval by the legislature).

Policymakers closely abided by the cap the first decade of its existence but then started finding ways to get around it.

Over the last few years, some lawmakers worked to have more and more expenses exempted from the cap through creative interpretations of what constitutes exempt expenditures.

In 2014, payments made to fund state employee pensions and post-retirement health benefits were taken out from under the cap.

The original intent of the cap’s architects was to have those payments under the cap, but they did not specify it in the cap language because they didn’t think it was necessary to explicitly say so.

Finally, in 2015, state Attorney General George Jepsen issued an opinion arguing that the spending cap carries no legal authority because the General Assembly never formally defined and enforced the cap.

Holding the line on spending cap exemptions is critical to getting state spending under control, restoring long-term fiscal stability to Connecticut, and demonstrating to taxpayers and businesses that the state is serious about improving its economic competitiveness.

CBIA has made enacting a workable state spending cap one of its top government affairs priorities for 2017.

Urge your Connecticut state legislators to make it a priority as well.