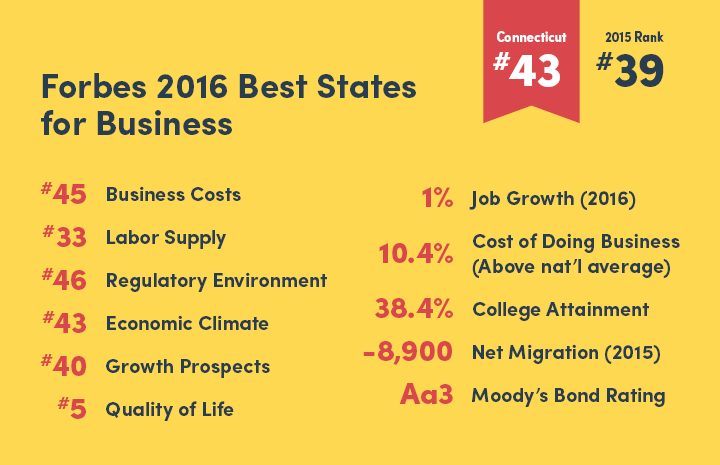 “The Nutmeg State rates fifth overall in quality of life thanks to low crime and poverty rates, a healthy populous, and strong schools,” the business magazine said in its 2016 report.
“But the regulatory climate and fiscal health rank among the worst in the nation.”
Forbes measures six key areas when compiling its best states list: business costs, labor supply, regulatory environment, economic climate, growth prospects, and quality of life.
Connecticut ranked in the bottom 10 in three of those areas in 2016, with one top 10 rank for quality of life.
The state has the sixth highest business costs (unchanged from last year) which include energy, labor, and taxes. Only Vermont, Hawaii, New Hampshire, New Jersey, and Massachusetts have higher costs.
The cost of doing business in Connecticut is 10.4% higher than than the national average, Forbes said, due in large part to energy costs, which are 59% higher.

Forbes ranked the state’s regulatory environment (including labor regulations, healthcare mandates, licensing, tort system) 46th, down five spots from 2015.
Our economic climate, measured by job, income, and gross state product growth as well as average unemployment over the past five years, was slightly improved at 43rd, although second worst among the New England states.
After a strong start, Connecticut’s job growth has slid precipitously in the second half of the year, with the state losing 14,900 jobs since June.
At 12th among all states, Massachusetts’ economy ranked best in the region. Vermont’s economy was 46th, worst in the region.

Connecticut's regulatory climate and fiscal health rank among the worst in the nation.

Utah topped the Forbes rankings for the third consecutive year, finishing in the top 10 in four of the study’s key categories, including growth prospects, regulatory environment, labor supply, and economic climate.
North Carolina remained in second with Nebraska unchanged at third, while Texas climbed two spots to fourth and Colorado remained in fifth.,
West Virginia was again ranked last. Maine, Mississippi, Alaska, and New Mexico rounded out the bottom five.
Rhodes Island, which ranked 46th in 2015, moved ahead of Connecticut to 42nd.
Michigan was the most improved of all states, climbing eight spots to 12th, while Kentucky had the biggest decline, falling nine places to 38th.