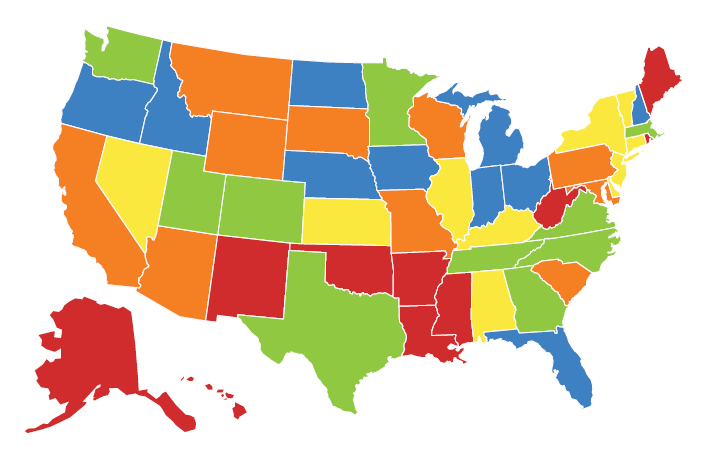 Top 10 rankings in education and workforce lifted Connecticut 10 spots to 33rd overall in CNBC’s latest America’s Top States for Business study, released this week.
Connecticut tied with Massachusetts and Pennsylvania for most improved state in the cable network’s annual competitiveness ratings, based on surges in educational opportunities and workforce quality and productivity. CNBC ranked the state third in education (up 15 spots from last year); tied for seventh in workforce with North Carolina (from 18th in 2016); and 13th in technology and innovation (19th in 2016).
Access to capital also earned Connecticut a top 20 ranking, tied with Missouri for 20th, up five spots from last year.
CNBC scores all 50 states on 66 economic competitiveness measures, separating those metrics into 10 weighted categories. Workforce is the most heavily weighted category, followed by infrastructure, cost of doing business, economy, and quality of life.
“The latest CNBC rankings rightly recognize Connecticut’s tremendous strengths in a number of important areas,” said CBIA president and CEO Joe Brennan.
“Education and workforce development will demand our ongoing attention, particularly given the rapidly growing demand for skilled workers in the aerospace and defense manufacturing sectors.”

While Connecticut’s strengths featured prominently this year, CNBC ranked the state in the bottom 10 in four key categories—infrastructure (47th), cost of living (45th), cost of doing business (43rd), and economy (41st).
Brennan said the state economy’s bottom 10 ranking was the “most troubling” part of the CNBC study, as that “really measures Connecticut’s competitiveness across all categories.”
Bloomberg reported earlier this month that Connecticut was one of just five states—along with Arizona, Mississippi, Nevada, and Wyoming—where economic growth hasn’t reached pre-recession levels.
Connecticut’s economy shrunk 5.9% between the fourth quarter of 2007 and the last quarter of 2016 and the state has recovered just 79% of all jobs lost in the 2008-2010 recession.
Brennan said the state’s inability to solve its ongoing fiscal issues is a major contributing factor, with the current budget debate representing “an opportunity for much-needed change.”

How do we fix our economy? How do we keep companies and jobs here? It starts with getting the budget right.

"We cannot afford to let our competitive strengths be further undermined by failing to recognize and address the state's significant challenges," Brennan said.
"How do we fix our economy? How do we make Connecticut more affordable and keep companies, families, and jobs here? It starts with getting the budget right."
Almost two weeks after the beginning of the fiscal year, state lawmakers—facing a $5.1 billion two-year deficit—have yet to adopt a new budget.
"Failure to adopt a budget delays our ability to make the necessary structural changes to drive investment and economic growth, create jobs, and get Connecticut back on track," Brennan said.
"CNBC's rankings reinforce the urgency for passing a budget that includes long-term spending reforms, no broad-based tax increases, and brings state employee wages and benefits in line with the private sector."

At 10th overall, Massachusetts was the best of the New England states in this year's study, ranked first for education and technology and innovation and in the top 10 for workforce (6th), access to capital (7th), and quality of life (10th).
New Hampshire climbed eight spots to 18th, with a first place finish for business friendliness. Vermont rose one spot to 35th while Rhode Island (45th) and Maine (46th) were unchanged from last year.
CNBC ranked Washington first this year, up from sixth in 2016, with top 10 ratings for its economy, technology and innovation, workforce, quality of life, and access to capital.
Last year's number one state, Utah, fell seven spots to eighth with declines across a number of categories, including education, workforce, business friendliness, and quality of life.
CNBC's 2017 top five states for business: