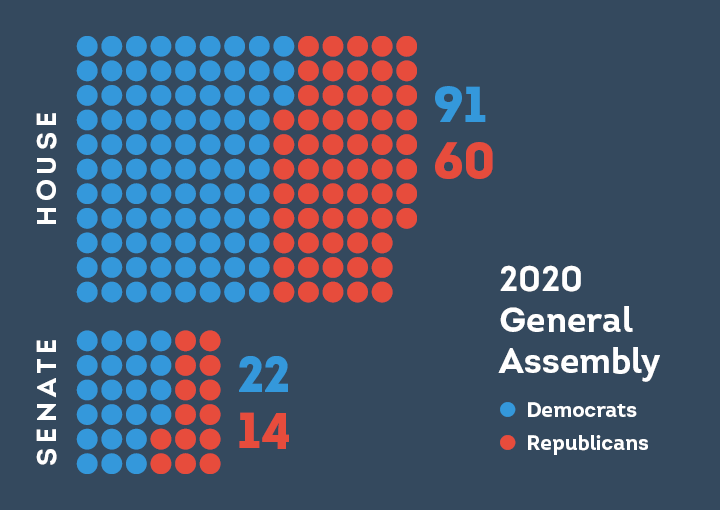 Retirements and political ambition created more than a two dozen open General Assembly seats for this year’s elections—one in the state Senate and 16 in the House.

Fasano has served in the Senate since 2003, the last 12 as his party’s leader. He was Republican President Pro Tem in 2017 and 2018 when the GOP and Democrats shared control of the Senate.

He is the only Senate incumbent not running for reelection. Seven sitting state senators—one-fifth of the chamber—stepped down ahead of the last election in 2018.

The GOP’s Paul Cicarella and Democrat April Capone are the candidates to succeed Fasano in the 34th Senate District.

Democrats currently control 22 of the 36 seats in the state Senate and 91 of the state House’s 151 seats.

Aresimowicz was first elected to the House in 2005 and was named to the all-important Speaker’s role in 2017.

Democrat JoAnn Angelico-Stetson and Republican Donna Veach are challenging for the 30th House District seat, which Aresimowicz won by just 50 votes in 2018.

Klarides has represented the 114th House District since 1999 and led her party in the lower chamber since 2015.

She will be succeeded by either Republican Daniel DeBarba or the Democratic Party’s Mary Welander.

Nine Republican and seven Democratic incumbents are not seeking reelection to the state House, one fewer than two years ago.

One of those incumbents—Rep. Rick Lopes (D-New Britain)—is challenging incumbent Sen. Gennaro Bizzarro (R-New Britain) in the 6th Senate District, while the rest are retiring from the legislature.

Democrat Manny Sanchez and Republican Jerrell Hargraves are running for the 24th House District seat that Lopes, co-chair of the legislature’s Banking Committee, has held since 2011.

The 35th House District, currently held by three-term incumbent Jesse MacLachlan (R-Westbrook), will be decided in a three-way race between Democrat Christine Goupil, Republican John Hall, and the Green Party’s John May.

Finance Committee ranking member Chris Davis (R-Ellington) is stepping down from the 57th House District seat he first won in 2011, with Democrat Jaime Foster and the GOP’s David Stavens the candidates this year.

The 69th House District will have a new representative for the first time since 1988, with Democrat Michele Zommer and the GOP’s Cindy Harrison looking to replace Rep. Arthur O’Neill (R-Southbury).

With the 21-year state House career of incumbent John Frey (R-Ridgefield) coming to a close, the 111th District will choose between Democrat Aimee Berger Girvalo and the GOP’s Bob Hebert.

The decision by five-term incumbent Gail Lavielle (R-Wilton) not to run again means she will be succeeded by either the GOP’s Patrizia Zucaro or Democrat Stephanie Thomas.

The 149th House District will have a new state representative for the first time in two decades, with Republican Kimberley Fiorello and Democrat Kathleen Stowe challenging to succeed incumbent Livvy Floren (R-Greenwich).