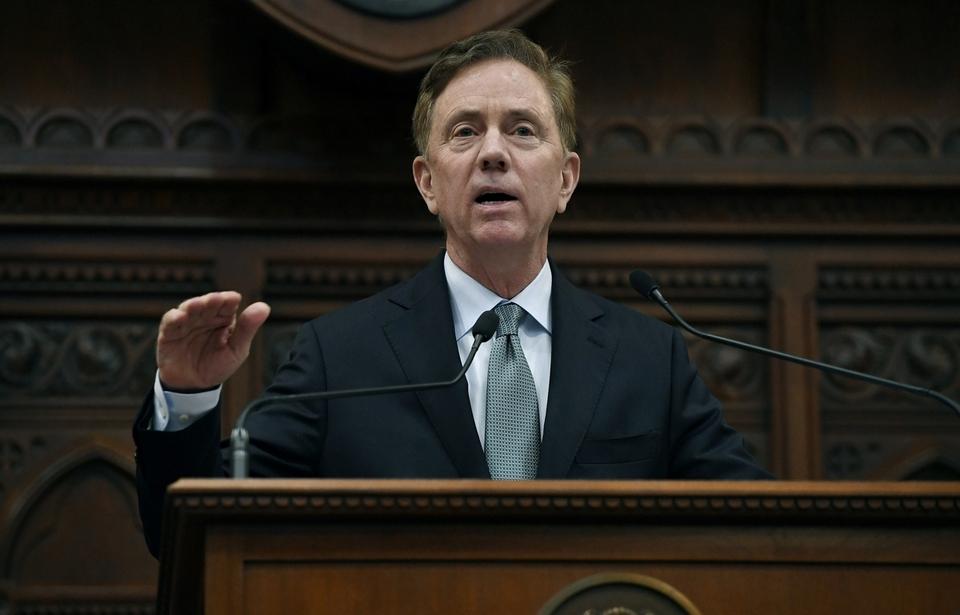 “The fiscal crisis before us is not just a short-term hole in the budget,” he said.
“We are digging that hole deeper by $400-$500 million annually, due to fixed costs such as pensions, state employee healthcare, and bonded debt—all growing faster than our economy.
“Fixed costs inherited from the past consume nearly a third of Connecticut’s budget—much more than our peers.
“This hurts our ability to make investments in our future—putting us at an enormous competitive disadvantage.”
Lamont’s proposed budget relies more on revenue increases than spending cuts to resolve projected budget deficits of $1.5 billion in fiscal 2020 and $2.2 billion the following year.
His budget increases revenues by $1.2 billion in fiscal 2020 over current levels, with $364 million in spending cuts. The following year features $1.7 billion in increased revenues and $523 million in cuts.

The governor outlined a number of measures to address fixed costs, including cutting annual bond authorizations by almost $600 million, linking state employee pension cost of living adjustments to investment returns, refinancing pension fund payments, and shifting a percentage of teachers’ pension fund payments to municipalities.
Fixed costs represent almost one-third of the current state budget, projected to increase to 40% by 2029. Lamont said his proposals will keep fixed costs to about 34% of overall spending by 2029.
Lamont released some budget details earlier in the week, drawing an immediate reaction from the State Employees Bargaining Agent Coalition that it would not agree to more concessions to its current contract, which runs until 2027.
“These pension reforms do not solve world peace,” Lamont said.
“They are just a start, but they offer a reasonable basis for long-term fiscal stability and building business and consumer confidence, which is a precondition to getting our state growing again.”

The governor shared two options for implementing highway tolls—a trucks-only system that would generate between $45-$200 million annually in net revenues and a second proposal for all vehicles that bring in around $800 million.
Lamont said he would only support the latter option—with 53 toll gantries on I-91, I-84, I-95,and Route 15—if it included a 30% discount for Connecticut drivers.
Either option could be fully operational by 2025, with all toll revenues dedicated to transportation funding.

We are digging that hole deeper by $400-$500 million annually due to pensions, state employee healthcare, and bonded debt.

Lamont also wants to expand the state sales tax to services such as dry cleaning, haircuts, tax preparation, veterinary care, interior design consulting, real estate services, and tax nonprescription drugs, textbooks, bicycle helmets, child car seats, vegetable seeds, and other exempt products.
The governor expects to raise more than a $1 billion over two years by expanding the sales tax, hiking the hotel tax to 17%, and adding new taxes on soda, electronic cigarettes, plastic bags, and liquor and wine bottles.
"Expansion of the base helps to make the sales tax more robust, fairer, and raises the revenue we need to get our budget into balance," Lamont said,
"I have been forewarned, every tax expenditure has a strong lobby behind it and the push back will be ferocious."

The 10% corporate tax surcharge—implemented over a decade ago as a temporary budget balancing measure—will become a permanent fixture under Lamont's proposal.

As expected, Lamont proposed eliminating the $250 biennial business entity tax—another temporary budget measure widely loathed as a nuisance tax for running a company in Connecticut.
However, he also wants to hike the $20 annual registration filing fee businesses pay to the Secretary of the State's office to $100, a 400% increase.
The net gain to businesses between those two changes is $45 annually.
Lamont also wants to reduce the cap on research and development tax credits and urban redevelopment to generate another $56 million over the biennium.

CBIA president and CEO Joe Brennan welcomed Lamont's focus on reducing the state's fixed costs.
"The fact that he's talking about those directly and trying to address it through restraints on bonding, as well as making some changes to state employee health and pension benefits, is a step in the right direction," Brennan said.
"I think we need to be more aggressive in those areas because we can't just be relying on revenue increases to balance the budget."
Brennan said CBIA will examine the sales tax expansion—and all revenue increases—to gauge the full impact on businesses and the state's economy.

We need to be more aggressive reducing spending because we can't just be relying on revenue increases to balance the budget.

Although the sales tax expansion does not include business-to-business services, Brennan still has concerns, noting there are "significant reasons why some goods and services are exempted from the sales tax."
"If your competitors outside Connecticut are not collecting that tax, it could affect your business," he said.
"We know there are going to be some revenue increases, we just want to make sure they're done in a way that does not inhibit economic growth and job creation."

Brennan also welcomed Lamont's proposal to reduce the cost of government by as much as $83 million over two years through the increased use of nonprofit providers, cutting overtime spending through operational changes, and modernizing and digitizing services.
Lamont also urged on businesses to join a loan forgiveness program to help Connecticut graduates who remain in the state to work. Travelers and Stanley Black & Decker have already committed to that program.
The governor's budget proposal now heads to the legislature.
Although there were things in the proposed budget that business likes—and some it doesn't—Brennan reminded people it's a proposal.
"It's just a starting point for discussion, so we'll engage in those discussions," he said.
"We'll look not only at the impact to individual businesses, but our ability to compete as a state.
"Whatever budget is ultimately adopted, it must enhance rather than inhibit our ability to grow Connecticut's economy and create jobs.
"We have to be very cautious about making the state unaffordable for businesses or individuals."