That dramatic decline leaves the state facing not only a deficit for this fiscal year, but adds another $1.1 billion to the $3.6 billion budget deficit already forecast for the next two fiscal years. It was an extraordinary week at the state Capitol, as key deadlines loomed Thursday and Friday for the legislature’s budget writing committees:

The state expects to finish the fiscal year with about $9 billion in tax revenues, down 4.7% from last year and the first decline since 2009. That’s despite the two biggest tax hikes in state history in 2011 and 2015.
“We need to develop new approaches to further reduce spending in order to balance the budget for the years ahead,” Ben Barnes, the Governor’s budget director said.
“Our budget, which already demanded painful choices, has just become $500 million worse. We cannot afford to stay on our current course.”

The Appropriations Committee was scheduled to act Tuesday on a $41 billion budget plan that increased spending by $400 million above the proposal Gov. Malloy released in February.

The committee plan also took $150 million from the state’s transportation fund, assumed the $1.5 billion union concessions proposed by Malloy, and rejected the Governor’s proposal to shift some teacher pension costs to municipalities.

However, the committee adjourned without taking a vote and did not meet again this week.

The same day, the Finance Committee held a public hearing on a number of bills, including proposals to raise state income and sales taxes (SB 1054 and HB 7322).

CBIA president and CEO Joe Brennan told the committee that tax hikes will not generate the revenues “advocates are unwisely claiming will solve Connecticut’s budget situation.”

“Connecticut simply cannot tax our way out of this budget situation,” Brennan said.

“Our economy was hit by two of the largest tax increases in Connecticut’s history in 2011 and 2015, and because the economy has not fully recovered, significant budget deficits continue.

“Connecticut has a spending problem, not a revenue problem. We need to analyze, structurally reform, cut, and in some cases eliminate programs.

“The planned upon and expected state employee concessions must be part of the budget solution to not only solve our current situation, but to ensure stable and predictable budgets going forward.”

Two days later, the committee passed a tax package (SB 787) that did not include any broad tax increases. It did include about $50 million in tax cuts—including pension and Social

Committee members said they viewed the package as a starting point for discussions, as did Governor Malloy.

“The revenue bill that passed in committee today is obviously not going to be the final package—there is much work still to do, and projections continue to change,” Malloy said.

“But here’s what should be obvious: today’s committee vote confirms a clear and growing consensus between our administration, and legislative Democrats and Republicans that this year’s eventual budget should not and will not be driven by new revenue.” 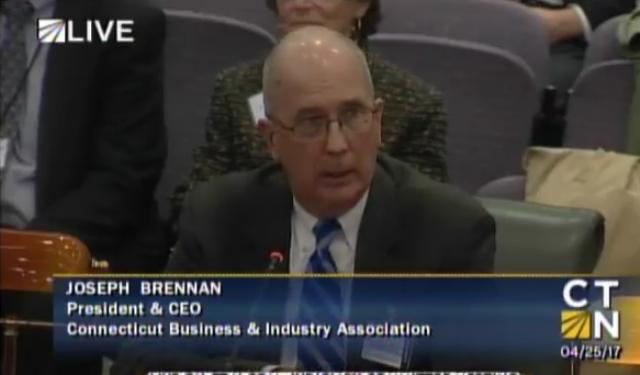 “If this isn’t the wake up call, I don’t know what is,” says CBIA’s Joe Brennan. “We’ve got to do things differently.”

Republicans unveiled their proposal April 27, saying it does not raise taxes while preserving many state services.

Speaking at the end of the week at a CBIA economic conference, Brennan called for lawmakers to support a budget that avoids tax hikes, streamlines state government, and adopts long-term spending reforms.

“If this isn’t the wake up call, I don’t know what is,” he said. “We’ve got to do things differently, we’ve got to come together.

“The business community has been pushing, but we’ve got to push harder. Not in a negative way, not in a partisan way, but get lawmakers to understand how serious this situation is.

“If we can’t get this right now, I’m afraid we’re going to lose a generation.