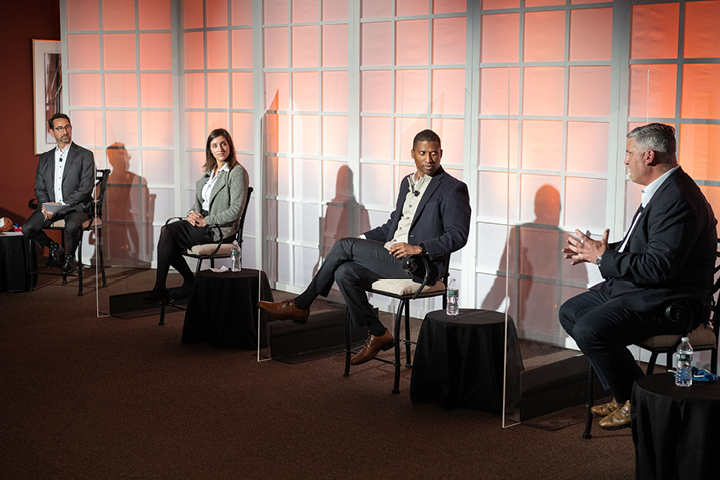 For many Connecticut business leaders, the word community has more than one meaning.

Of course, it’s the city or town where they do business and some of their employees reside.

But for a large number of businesses—especially manufacturers—it’s also the business community and their fellow business leaders.

And at no time has cooperation among the Connecticut business community been more evident than during the coronavirus pandemic.

“I love the collaborations between companies and the communities they’ve created, and the passion the owners have for their businesses and their people,” Meredith Shay, CEO of Colchester-based custom safety netting manufacturer InCord, said Nov. 19 at CBIA’s Annual Meeting.

“It really seems to me that the businesses have established themselves as a part of the community and they take that role very seriously in Connecticut.”

“I’ve only been in Connecticut about three months but it’s been absolutely enjoyable so far and I’m thoroughly impressed in terms of the collaborations and the partnerships among the many entities.”

“There’s a collective of manufacturers in the state that collaborate well together, and it pushes the technology,” Varesio said.

“We need to win with technology to compete globally, and I certainly see that happening in Connecticut.”

CBIA president and CEO Chris DiPentima, who moderated the discussion, said the collaboration among Connecticut businesses is unique.

“Connecticut businesses came together during the pandemic and shared with each other what worked.” DiPentima said.

“I did not see that in other places where I’ve worked, that real collaboration and willingness to share best practices.”

Community also means helping the people who live in the town where you do business—your neighbors.

InCord, which also makes playground equipment, donated some to the town of Colchester, whose workers installed it.

“It felt great to be able to contribute to the town where we’re located and to the kids of the families who work with our company,” Shay said.

“Our business is part of the community and we have a strong belief that we’re not only building it for ourselves and the current citizens but also for future generations, so we try to keep that in mind, making sure our work and growth are sustainable.”

Medtronic contributes to its community in several ways, Varesio said.

It pays employees for up to 16 hours each year doing charitable work in the community.

“If you want to help build a house for Homes for Our Troops, Medtronic will pay you to do it,” he said.

“Our businesses do so much for Connecticut besides providing jobs, and this pandemic has taught us to appreciate all that we have,” DiPentima said.

The pandemic has also given companies a chance to reassess their practices and operations.

At InCord, the focus was on employees.

“From a business standpoint, it became important to really understand communication, how to communicate with people quickly and effectively on a variety of topics, including workplace safety, how everyone was doing and feeling—it was a big change,” Shay said.

“We started blogs, we started videos, video conferencing—all these new tools that we really learned how to harness and use to our benefit to communicate better.”

Graham said Stanley has focused on three things during the pandemic—keeping employees and their families safe, ensuring business and financial continuity, and supporting the community.

“We put a significant focus on all three,” he said.

At Stanley Industrial, the emphasis was on doing more with less, Graham said.

“We did not let this crisis go to waste. We used it as an opportunity to re-pivot the business.”

“We helped our suppliers in the state and around the world, and ensured our factory workers and their families were safe,” he said.

The pandemic forced Medtronic to learn about business continuity, he said.

“Now, when things like this happen in the future, we’ll focus on how we’re going to be able to sustain our global manufacturing footprint, so it’s really been impactful.”

Despite the pandemic, all three companies stepped up their investments in Connecticut this year.

Medtronic is also on the verge of unveiling the first clinical robot in its robotic surgery platform.

“We’re going to have some leapfrog technology in robotics and patient outcomes are going to get better because of the investment we’re making in Connecticut,” Varesio said.

As much as the three business leaders enjoy living and working in Connecticut, they agreed the state needs to do more to promote workforce development.

“It’s not the manufacturing that I was brought into when I graduated college.

“There are no oily presses, you’re working in clean rooms, and it’s a good career in Connecticut.”

DiPentima said the roughly 9,000 Connecticut high school graduates who don’t go to college or the military should be groomed for manufacturing careers.

“We need to get to those kids before high school—in middle school—and talk to their teachers, guidance counselors, and principals to give those students a pathway,” he said.

“Being able to leverage the cities to provide the workforce for the future is what will differentiate us as a state and what will make us supremely competitive,” he said.