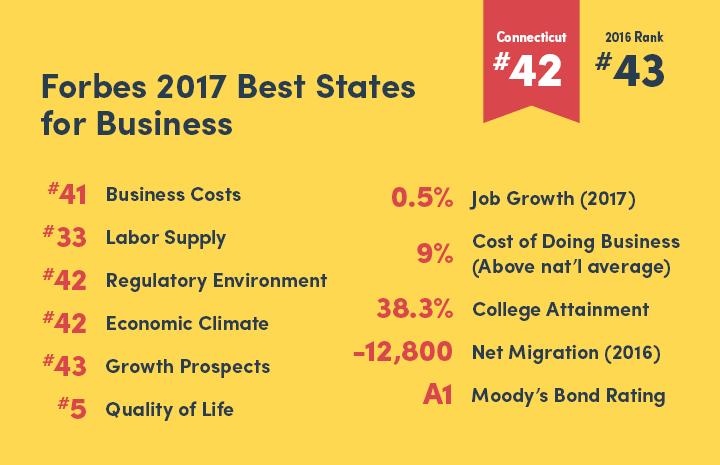 “The Nutmeg State rates fifth overall in quality of life thanks to low crime and poverty rates, a healthy populous and strong schools,” Forbes notes in its report.
“But the regulatory climate and fiscal health rank among the worst in the nation.
“Business costs are 9% higher than the national average, due in part to energy costs that are 60% higher.”
Forbes measures six key areas when compiling its best states list: business costs, labor supply, regulatory environment, economic climate, growth prospects, and quality of life.

Connecticut ranked in the bottom 10 in four of those areas in 2017, with one top 10 rank for quality of life.
The state has the ninth highest business costs in the country (a slight improvement over last year’s 45th rank), which include energy, labor, and taxes.
Forbes ranked the state’s regulatory climate (including labor regulations, healthcare mandates, licensing, and tort system) 42nd, up four spots from 2016.
The state’s economic outlook, measured by job, income, gross state product growth, and average unemployment over the past five years, improved one spot to 42nd.
Connecticut’s economy saw improvement in the second quarter of this year, posting 1.4% growth after shrinking in each of the previous four quarters.
After a strong start to 2017, job growth declined dramatically in the second half of this year, with the state losing over 12,00 jobs since June.

At 9th among all states, Massachusetts’ economy ranked best of the New England states. Vermont’s economy ranked 44th, worst in the region.
Connecticut’s growth prospects fell three spots to 43rd this year. That category reflects employment, income, and GDP forecasts over the next five years, as well as capital investments and business openings and closings.

The regulatory climate and fiscal health rank among the worst in the nation. Business costs are 9% higher than the national average.