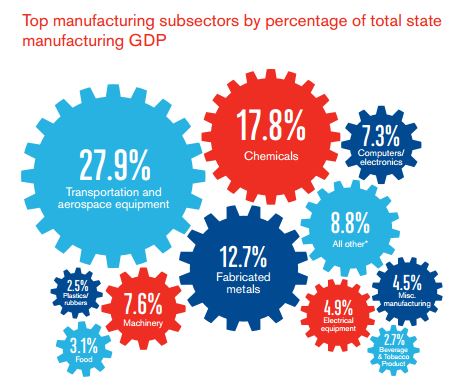 A new report from the Connecticut Economic Resource Center highlights the strengths of the state’s economic and business landscape.
CERC found that Connecticut ranks:

Connecticut is home to more than 4,500 manufacturing companies, employing over 155,000 workers.

Connecticut is ranked #6 in the State Technology and Science Index, which benchmarks our innovative technological capabilities and job creationism.
The state ranks #8 in private venture capital deals per capita in the nation, promoted by initiatives such as VentureClash that encourage competition between global companies to expand their business investments in Connecticut.
The state is also ranked as the 5th most energy efficient state—with the second-lowest energy consumption—saving businesses and residents money while developing the latest efficiency standards and solutions.

These are impressive statistics, and great strengths to build upon.
CERC is right in celebrating Connecticut’s real assets.
The key for Connecticut is to leverage where it leads against where the state lags—fiscal sustainability, overall business costs, and regulatory burden—and address the challenges facing new and future work force development.
All of these challenges can be met with leadership, courage, and the right sense of urgency to drive long-term structural reforms.
That’s the way Connecticut can deliver core services and keep its eyes fixed on removing the regulatory costs and red tape that are barriers to growing the economy.
Connecticut has phenomenal commercial and defense manufacturing, innovative bioscience, and pharmaceutical companies, globally renowned financial-services and hedge fund and insurance companies, and a highly skilled and productive workforce that is not only the envy of any other state in the country, it is the envy of any country in the world.