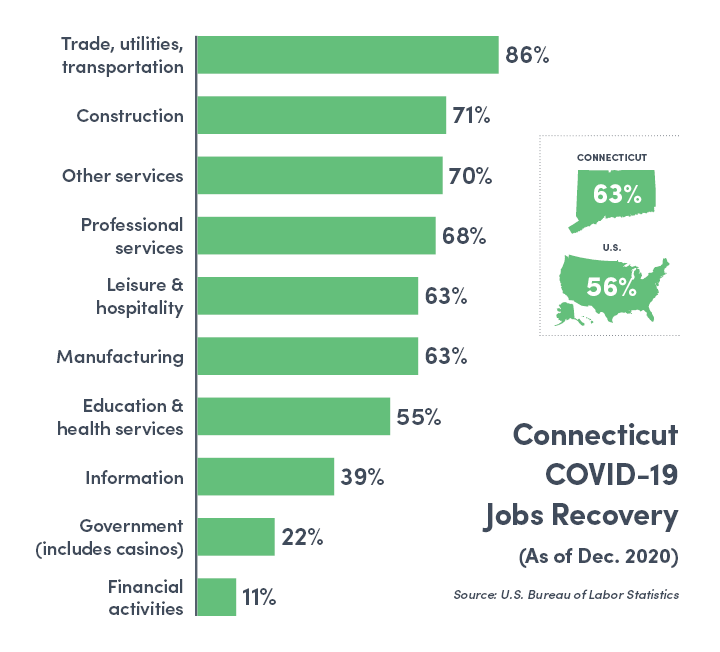 The state’s jobs recovery also stalled for a second month in December, with the latest monthly employment report showing a loss of 3,400 jobs.

Connecticut has recovered 63% of the historic 291,300 jobs lost in March and April last year.

That’s the highest of any New England state—the region’s recovery rate is 53%—and well above the national average of 56%.

Massachusetts’ employment fell 9.1% last year, the worst decline in the region, and the state has recovered just 49% of its pandemic-related job losses.

“We are weathering the pandemic better than our New England neighbors and much of the rest of the country,” CBIA president and CEO Chris DiPentima said.

“However, that’s little consolation to those who have lost their jobs and to the thousands of small businesses that have shut down.”

“Policymakers must take a laser focus to policies that get Connecticut residents back to work and support small businesses that have been struggling for almost a year now,” he said.

“We have to change the narrative and CBIA’s just-released 2021 Rebuilding Connecticut policy recommendations provide a roadmap for getting people back to work, driving growth, and rebounding better and stronger than before.”

“It’s heartening that the Lamont administration and many in the legislature also support these initiatives, including workforce development, urban renewal, infrastructure investment, small business relief, and taxpayer return on investment,” he said.

“Unfortunately, the policy agendas of some legislative committees, such as the Labor Committee, will only undermine efforts to change how the state operates and rebuild our economy.

“Connecticut has tremendous opportunities that we must capitalize on, that we cannot let pass by. We hope state lawmakers will stay focused on what truly matters—rebuilding Connecticut.”

Connecticut’s reported unemployment rate was 8% in December, one of the highest in New England. U.S. unemployment was 6.7%

The state’s manufacturing sector performed strongly in December, leading all sectors by adding 1,900 new jobs to finish the year down 3,000 positions (-1.9%).

The government sector, which includes local, state, and federal government jobs and employment at the state’s two casinos, lost 2,400 positions in December and 18,500 for the year (-7.8%).