Around the World in Three Weeks This past summer, UTC Aerospace Systems selected Ahmed Hassan for a three-week paid internship at the company’s Windsor facility. 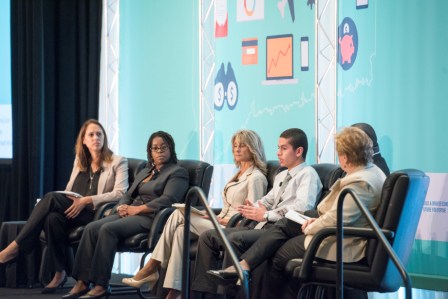 Hassan, whose family moved to the U.S. from Egypt only five years ago, is a senior at the Academy of Engineering and Green Technology, one of three learning academies at Hartford Public High School. He is fluent in English and Arabic.
At first, Hassan wasn’t quite sure what to expect from his internship, but he questioned whether he would like it.
“Before it started, I told my parents that I didn’t want to go to work in an office, because it’s probably going to be boring,” he admits.
After some encouragement from his parents, however, he decided to give it a try, and now he—and his family—are very glad he did.
“I went, and after the first week, I found that I did enjoy it,” says Hassan.
“And my family was happy and proud of me. They felt it was something good and proved that I could be successful in life. I was happy that they were proud of me. It feels good when your family looks up to you. My brother even said, ‘I want to come with you and see how it is.’”
Hassan has an older sister and two younger brothers.
Paving the Way for a Switch to Solar
Hassan was assigned to provide UTC Aerospace Systems information about solar companies and solar incentives offered by governments in many of the 26 countries where the company operates approximately 150 sites.
The firm’s goal is to switch from nonrenewable sources of energy at those sites to realize cost savings and become as environmentally friendly as possible.
Although Hassan did almost all of his research via the Internet, he spent his first day on the job working the old-fashioned way.
“My first day, I didn’t have a computer,” he recalls.
“So sitting for eight hours just reading books and articles—I didn’t like that. But after I got my computer and started doing some research, the time passed quickly, and I didn’t feel bored; I felt like I could do it. It was a good experience. Now I know I can work for eight hours a day!”
Hassan’s work went smoothly, except for one speed bump, he recalls.
“I researched 15 countries, but the only one I had a problem with was Poland, because they didn’t have any websites in English,” he said. “I also researched Dubai, and I was able to use my knowledge of Arabic to do that.”
At the end of his three-week stint at UTC Aerospace Systems, Hassan was required to present the results of his research.
“I gave my presentation to the whole Environment, Health, and Safety team at the Windsor facility and also via conference call with the company’s Charlotte headquarters, as well as sites in the UK and France,” he said.
A Colleague
The experience, says Hassan, was particularly enjoyable because of the people he got to work with.
“They were great. They made me feel welcome, like I was their friend,” he said. They were very friendly and were great working together as a team.
“They joked around and treated me as an adult, not as a child. They treated me like a colleague, someone who could work with them, not like an outcast who just came in for a few weeks and doesn’t belong here.
“So that was something good to motivate me to keep working there. I enjoyed it.”
Valuable Lessons
Hassan, who plans to go to college next year and major in petroleum engineering, learned a lot from his time with UTC Aerospace Systems. In particular, he says, the internship opened his eyes to a whole new world of career possibilities.
“Most of the careers where I had my internship—I didn’t know they even existed,” he said.
“I didn’t know what everyone there did at first, and they even had a hard time explaining to me what they do. So that did open my mind to more jobs, more careers that are available.”
The experience also taught him valuable work skills that he can use no matter what direction his career takes.
“It showed me how to work as a team at a job,” he says. “It showed me the importance of being responsible, because I had to get my job done and turn it in on time without mistakes.
“And I learned that I wouldn’t always be told how to do my job, that I had to learn some things myself.
“So all that helped me adapt quickly to the workplace and know what my colleagues and supervisor expected of me and the criteria I needed to meet to be successful at that job.”
Mutual Benefit
Hassan’s internship provided UTC Aerospace Systems with a tangible benefit that saved the company time and resources and enabled them to take a big step toward their goal.
“One of my colleagues told me that they could have researched the solar companies and found out what they offer, but they didn’t have the time,” he said.
“If they would have done it themselves, it would have taken a year or two, because no one had the time to devote to it all at once the way I was able to.”
Now, he said, the team could begin discussing the move to solar with the company’s international sites and start taking action.
Something Great
“As I was working on the project,” he adds, “I realized that if all these sites switched to solar power, they would decrease their CO2 emissions, use less water, and help preserve the environment.
“I liked that, because I don’t like global warming. So when I saw that what I did could help them improve the environment, I felt like it was something great, and I was proud of my accomplishment.”
Previous Article
Next Article