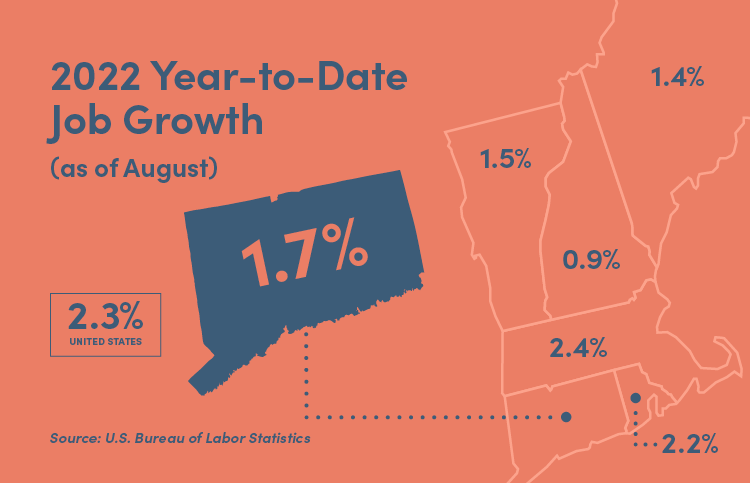 Connecticut added 2,900 jobs in August, marking an eighth straight month of growth as the state continues its pandemic recovery.

The latest jobs report featured signs that job seekers may be returning to the market, with the unemployment rate rising fourth-tenths of a point to 4.1% as the state’s labor force grew by 5,700.

“Normally we would not see an increase in the unemployment rate as a positive,” said CBIA president and CEO Chris DiPentima.

“However, those entering or reentering the labor force often start out on unemployment.”

While the worker shortage is a national issue, Connecticut is feeling the impact more acutely than other states.

Connecticut’s labor force has declined by 45,100 people or 2.3% since February 2020—41% of the region’s losses. The U.S. labor force has recovered all pandemic losses and is now in growth mode.

“The worker shortage is a crisis and remains the biggest threat to the state’s economic recovery,” DiPentima said.

“There are a number of factors driving this shortage, including some issues that predate the pandemic, such as the state’s high cost of living and high cost of doing business.”

“The worker shortage is why CBIA is asking candidates for elected office to support our just-released Transform Connecticut policy recommendations, designed to open doors to opportunity for all residents,” DiPentima said.

“We must tackle the high costs of living and running a business, implement pathways to rewarding careers, and leverage the state’s many strengths to make our economy more vibrant, robust, and equitable.”

Connecticut has now recovered 88% of the 289,400 jobs lost to pandemic-related restrictions and shutdowns in March and April of 2020, with the U.S. recovery rate at 101%.

Massachusetts leads the region in year-to-date job growth at 2.4%, with the national average at 2.3%.