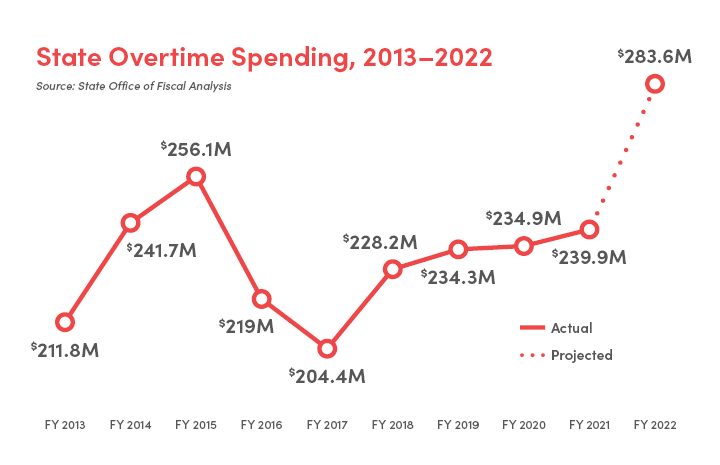 State government overtime spending is up 8.4% over last year, with agencies on pace to spend a record $283.6 million in fiscal 2022.

Agencies spent $141.8 million on overtime through the first half of the year, $11 million more than for the same period in fiscal 2021.

Overtime costs represent more than 11% of Connecticut’s total state payroll, compared with 5% in Massachusetts, 4.7% in New York, and New Jersey’s 4.2%.

As overtime is allowed as a factor in calculating state employee pensions, the failure to control those costs drives up Connecticut’s long-term liabilities, with significant implications for taxpayers.

Of the five state agencies that account for 93% of all overtime spending, only the Department of Correction saw a decline from the first six months of fiscal 2021.

DOC continues to lead all agencies in overtime costs, spending $24.9 million in the second quarter of 2022 for a six-month total of $48.47 million, -0.9% lower the same period last year.

The agency spent a record $91.6 million on overtime—about 18% of payroll—last year, despite the state’s prison population falling to a three-decade low.

Overtime costs increased 5.5% compared with the first half of 2021 to $28.33 million at the Department of Mental Health and Addiction Services.

Department of Children and Families overtime nearly doubled over the same period last fiscal year, with the agency spending $9.05 million through Dec. 31, 2021.

Total overtime spending at all other agencies increased 0.7% for the first two quarters to $9.8 million.

Year-to-date overtime increased 670% to $219,851 at the Department of Labor—the largest percentage increase of any agency—656% at the Division of Criminal Justice, and 390% in the Attorney General’s office.