Exporting is a vital component of Connecticut’s economy. What are the issues, challenges, and prospects for companies engaged in international trade? What prevents others from entering the global marketplace? 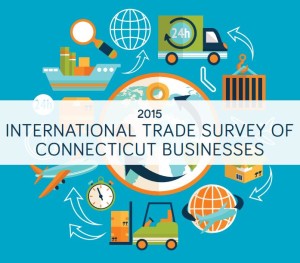 By exploring these and other questions, the Connecticut Business & Industry Association’s fifth biennial International Trade Survey of Connecticut Businesses provides a comprehensive understanding of the current export environment, barriers to growth, and the risks and rewards for businesses in the state.

This year’s survey is sponsored by Santander and CohnReznick, two companies committed to trade support services. It was also made possible by the U.S. Department of Commerce (Middletown office) and the Connecticut Department of Economic and Community Development. Together with local business organizations, the DOC and DECD assisted in the survey’s development and distribution.

The purpose of the survey is to:

Thanks to nearly 6,000 companies exporting from within the state, Connecticut achieved record export levels in 2013, with trade in commodities reaching $16.5 billion and contributing to an all-time high of $2.3 trillion in U.S. exports.

With a significant concentration of service exports absent from these calculations (including financial services and insurance), Connecticut’s overall export value—as well as its potential—is even higher than these numbers tell.

About 87% of our state’s exports are manufactured goods. Transportation equipment, industrial machinery, and computer and electronic equipment top the list.

Though U.S. international trade in goods and services is down slightly over the past year, the world is changing in ways that will open up greater opportunities.

By 2030, more than two billion Asian consumers are expected to join the global middle class, with many of the same tastes and appetites for consumer goods and services that have long been hallmarks of American middle-class life.

The Asian market is projected to be six times larger than that of the U.S.; Mexico and several Latin American economies are not far behind.

In fact, more than 95% of the world’s consumers live outside the United States, making export success vital to our economic competitiveness. Connecticut ranks 27th for exporting among all states, and 18th per capita.

There is room to grow. han three-quarters of the companies we surveyed (79%) are engaged in international trade, and most are veterans in the global marketplace: 37% have exported for 10–20 years, and 46% for more than 20 years.

For most respondents (52%), the main impetus for entering foreign markets was to increase company sales and profits.

Nearly a quarter (24%) entered primarily to follow their clients, and 16% entered foreign markets mostly as a way of diversifying their business.

Exports account for a sizable share of companies’ revenues. More than one in five exporters attribute at least 26% of their revenues to exports. Close to two-thirds (62%) acknowledge that the global slowdown has impacted their business. About half (49%) have seen a reduction in new orders for exported goods, 23% have experienced difficulty in pricing their goods because of exchange rate volatility, and 15% have had difficulty securing long-term orders.

On the other hand, one-third of exporters say the slowdown has not affected their business, and 5% have seen an increase in orders.

Sixty-one percent of respondents say exporting has helped them weather the slump.

That distribution is expected to shift over the next three years, putting northern Asia in the top spot.

Only 13% of Connecticut businesses surveyed anticipate doing the majority of their exporting within North America in the next three years, down from 26% currently. Similarly, while about a third of respondents do most of their exporting to western Europe now, only 24% expect that to be the case in three years.

On the other hand, Connecticut companies plan to sell more of their goods and services in northern Asia: 26% of respondents in the next three years, up from 18% today.

This is our first survey in which western Europe exceeded North America as a trade destination.

Other markets with moderate growth potential for Connecticut exporters include eastern Europe, not including Russia (6% of businesses identify this as their primary market three years from now), and southern Asia (4%). In addition to exporting, 13% of respondents have facilities abroad, and 24% have employees outside the U.S.

Primary reasons for investing in overseas facilities and personnel are to be closer to major customers and suppliers (cited by 86% of respondents with operations abroad) and to forge stronger international relationships (62%). Lower business costs were also cited, but not by a majority of businesses.

In 2011, 30% of respondents identified lower business costs as a reason for investing in facilities or personnel outside the U.S.; in 2013, that number went up to 37%; this year it has dropped slightly, to 33%.

Lack of knowledge about foreign markets is the single greatest challenge for Connecticut exporters (identified by 18% of respondents), followed by cost competition and payment delays/defaults (both 17%), and trade/regulatory barriers (15%). While 61% of Connecticut exporters have experienced delays in receiving payment for international sales, most (87%) have not experienced buyer defaults.

Two-thirds of respondents have established prepayment agreements with some or all of their trading partners, which limits their risk but possibly also their market.

About three-quarters of Connecticut exporters surveyed say they benefit from NAFTA and other current free trade agreements with countries such as Korea, Israel, Chile, Panama, and Peru. Seventy-nine percent believe the Trans-Pacific Partnership (TPP) agreement and the Transatlantic Trade and Investment Partnership (TTIP) with the European Union, both of which are under negotiation, would prove beneficial to their businesses.

Given the anticipated pivot to Asian markets, support for TPP is not surprising. Whether the agreement crosses the congressional finish line this year, however, remains to be seen.

Similarly, progress on TTIP negotiations has stalled amid uncertainties about environmental and safety standards and financial regulations.

Companies cited areas where they could use help strengthening their export activities. The top three areas were making connections with customers (62%), acquiring better market research (40%), finding foreign representatives (32%), and getting assistance with export documentation (26%).

Banks. While half of Connecticut business owners who have sought export financing describe banks and other financial institutions as friendly or somewhat friendly to their needs (52%), one-third say banks are not friendly.

By way of comparison, CBIA’s Quarterly Economic & Credit Survey conducted in the fourth quarter of 2014 found that 30% of Connecticut businesses (not limited to exporters) considered the current lending climate good or excellent, 50% called it average, and 15% characterized it as fair. Only 5% said it was poor.

This may point to the need for exporters to work with banks whose expertise includes foreign trade financing solutions and risk mitigation.

Trade shows. When it comes to finding new customers or marketing a product or service, participation in domestic and international trade shows often delivers results.

The greatest barriers to participating in international trade shows are cost (identified by 67% of respondents), time/resource constraints (47%), and staffing (38%).

Lack of knowledge about international trade shows (27%) and lack of interest (27%) were also identified, uncovering an area where more focused outreach and marketing could make a difference.

Trade intermediaries. About half of Connecticut exporters surveyed in 2015 (49%) use the services of trade representatives to establish new markets, up considerably from 2013 (36%). Sixty-five percent use international freight forwarders, down from 77% two years ago. Eleven percent use lawyers, accountants, or banks specifically to establish new export markets; a greater share (30%) use legal advisors for general international trade support.

Internet. Connecticut businesses are not using the Internet to its fullest potential to support their international trade efforts, and Internet readiness and capability among the state’s exporters has not statistically improved over the past two surveys.

Despite widespread use of the web to communicate with international customers/clients and market their goods or services globally, a majority of respondents (63%) acknowledge that their company website is not capable of processing international orders. While that’s improved from 77% in the last survey, it shows a continuing weakness. Only 16% have their online content translated into foreign languages.

Government assistance. Not every company with an exportable product or service has entered the global marketplace, and over a quarter of those not engaged in foreign trade (27%) would like to be.

From their perspective, the greatest barriers to exporting are a lack of knowledge about foreign markets and licensing concerns.

Fifty-nine percent of export-capable businesses in Connecticut are aware of federal or state government services to help smaller businesses get into international trade. More outreach efforts could yield better results.

We asked businesses, in an open-ended question, how the state could facilitate their exporting activities. Most recommended reducing the costs, taxes, and regulatory burden on businesses and adopting more business-friendly policies. Recommendations also included assistance with targeted market research, maintaining the U.S. Department of Commerce office in Middletown, and trade show support and financing.

An integral part of doing business for a growing number of Connecticut companies, exporting is vital to the state’s economy and its long-term prosperity.

Since the release of our first international trade survey in 2007, we have seen a steady (and at times steep) increase in the number of Connecticut companies doing business abroad—from 53% to 79% over an eight-year period.

The role that exporting played in buoying Connecticut companies during a deep recession and slow recovery is not lost on the business community and should help guide state and federal public policy and regulatory decisions. Despite the rising U.S. dollar versus major foreign currencies and the economic slowdown in some areas of the world, exporters are successful and bullish.

While most of Connecticut’s exporters are not newcomers to international trade, our survey shows that both veterans and export-capable businesses would benefit from targeted help either entering the global marketplace or expanding their reach.

In the near term, the economic slowdown in Europe and Asia poses challenges for exporters but also underscores the need for Connecticut’s business community to expand access to growing markets and marshal the full resources of state and federal government export assistance programs.

Indeed, there remains tremendous untapped potential for the state’s chief job creators—small and midsize businesses—to enter new markets, increase their share of U.S. exports, and compete for the 95% of customers in the world who live outside our nation’s borders.

Most companies surveyed—85%—employ fewer than 100 workers, and manufacturers account for the greatest share of respondents. Nineteen percent of respondents are in the aerospace industry specifically.

The majority of businesses (92%) reported less than $50 million in gross sales or revenues for the most recent fiscal year.