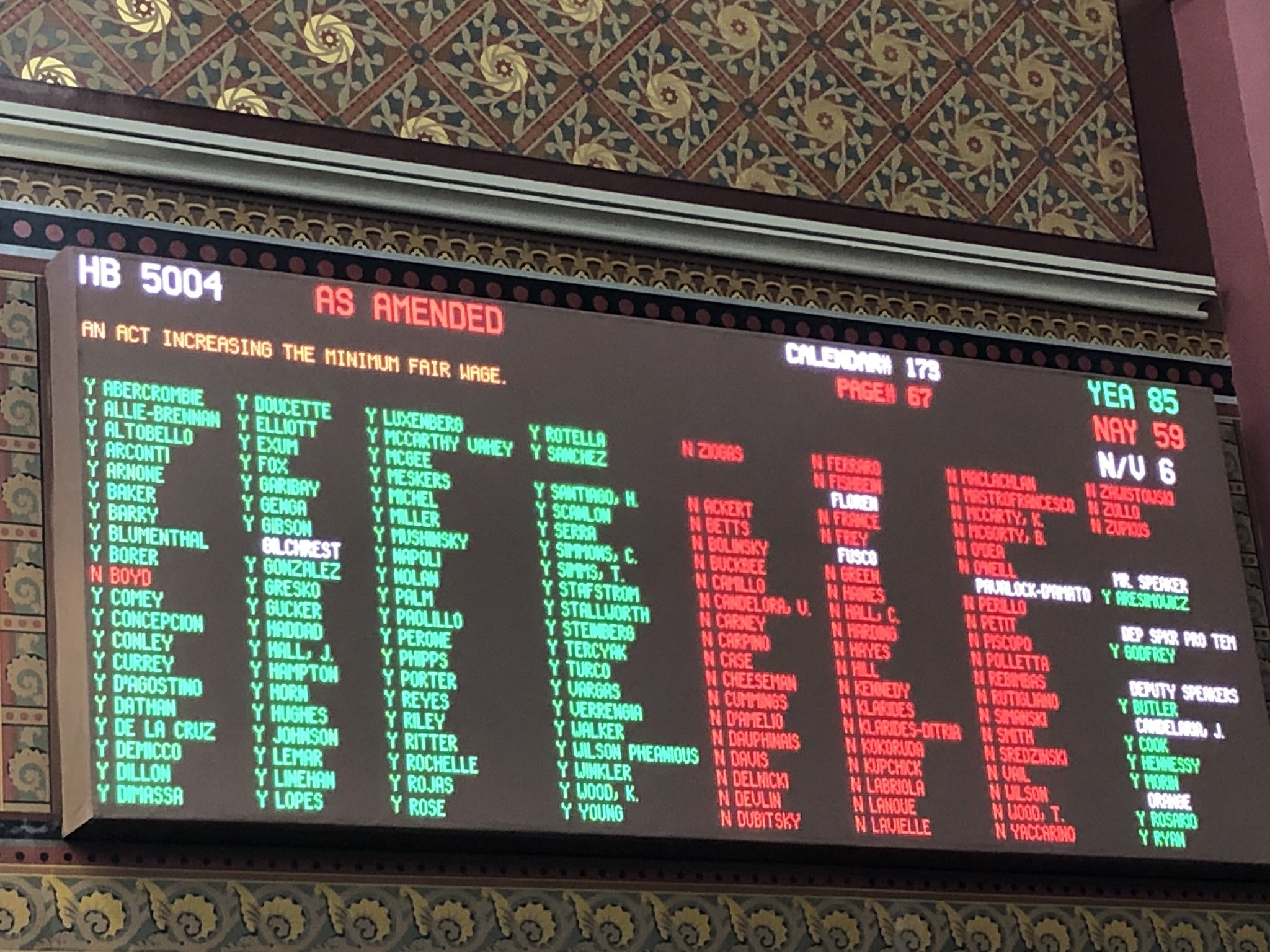 The state House this week voted to hike Connecticut’s hourly minimum wage to $15 by 2023 following an all-night, 14-hour debate.

Should the state Senate follow suit, the move is certain to hurt small businesses in a state still struggling to recover from the 2008 recession.

The House approved HB 5004 on a mostly along party line 85-59 vote, with Democrats Pat Boyd (D-Pomfret) and Chris Ziogas (D-Bristol) joining all Republicans present in voting against the bill.

The legislation increases the hourly wage in the following steps:

The state’s hourly minimum wage was last raised in 2017, reaching $10.10 following a series of incremental raises over four years.

CBIA’s Eric Gjede noted that the state’s small businesses will shoulder most of the burden of the latest wage hike.

“At a time when businesses in Connecticut are struggling to grow and create jobs, Connecticut is making running a business even more costly,” Gjede said.

“The high cost of doing business in this state has contributed to our slow recovery from the recession and mandating above-market wages forces businesses to automate or make other cuts—including employees, hours, or benefits.

“This bill makes it that much harder for small businesses to compete with larger companies that have the ability to automate their processes and absorb these increases.”

After Jan 1, 2024, any increases in the wage will be tied to the employment cost index, a quarterly metric created by the U.S. Bureau of Labor Statistics that details changes in the costs of labor across the country.

Connecticut would be the only state to index its minimum wage to the employment cost index, rather than the more commonly used consumer price index.

If the employment cost index shows two consecutive quarters of poor performance, the state labor commissioner has the option of making a recommendation to not raise the wage.

But if the index goes down, the minimum wage will not, said Rep. Robyn Porter (D-New Haven), co-chair of the Labor and Public Employees Committee and a major proponent of the hike.

HB 5004 does not raise the $6.38 minimum wage for tipped workers, which includes restaurant wait staff, or bartenders, who will continue to make $8.23 an hour.

It also includes a 90-day hourly training wage for 16- and 17-year-old workers that’s 85% of the minimum wage.

Advocates say the increase will help the 330,000 workers in Connecticut who currently earn the minimum wage by putting more money in their pocket.

But opponents, including the business community, said it will hurt small businesses and result in fewer hours and opportunity for minimum wage workers.

“They said, ‘We see this coming. We know this is going to pass and we will simply cut the hours of the people who work for us because our profits are so slim,'” she told fellow lawmakers.

Rep. Arthur O’Neill (R-Southbury) said the wage hike will lead to more automation, which will hurt the very people the hike is intended to help.

Gov. Ned Lamont praised the bill’s passage, calling it a “compromise” that will “stimulate” the state’s economy.

“In order to grow, we need policies that protect our workforce and the small businesses who need them,” Lamont said.

“Not one business advocacy group is in favor of this legislation,” said Rep. Joe Polletta (R-Watertown), a ranking member of the labor committee.

While the total cost of the pay hike to business is unknown, we do know it will cost Connecticut taxpayers millions of dollars annually.

The legislature’s nonpartisan Office of Fiscal Analysis estimates a $15 hourly minimum wage will cost taxpayers at least $50 million a year through increased compensation and contract costs to state agencies and municipalities.