CBIA and BlumShapiro’s 16th annual Survey of Connecticut Businesses marks a period of both tremendous uncertainty and opportunity for the state.
When this survey was conducted in June, the legislature had yet to resolve a two-year, $5.1 billion deficit and adopt a state budget. Connecticut’s unstable fiscal situation is a key contributing factor as the state continues to lag most of the region and the country in post-recession job and economic growth.
It’s no wonder that many businesses cite the uncertain and unpredictable nature of legislative decision-making as a major barrier to growth. Connecticut is still recovering from the 2008-2010 recession, and the loss of key corporate headquarters and ongoing fiscal instability have gained national attention.
On the positive side, Connecticut has finally gained back all the private sector jobs lost in the recession and added 11,600 jobs year-over-year through July.
Despite the state’s uncertain fiscal situation, the majority of Connecticut businesses expect to turn a profit this year and many plan to hire new workers. The anticipated expansion of the aerospace and defense sectors also offers optimism for the future.

The State of Business

Overall, business growth remains relatively unchanged since our last survey.
Nearly half of Connecticut businesses are holding steady (49%)—compared with 51% in last year’s survey—while 36% are growing (unchanged from last year), and only 16% are contracting (13%).
Those reporting net profits fell two percentage points to 66% this year. The percentage of businesses breaking even was unchanged at 17%, while those reporting net losses rose two points to 17% in this year’s survey.

Sixty-five percent of businesses forecast profits by the end of this year, with 24% expecting to break even and 11% forecasting losses.
The top five factors hampering business growth and investment in the state are the high cost of living (78%), uncertainty and unpredictability of state legislative decision-making (72%), taxes (69%), additional business costs from state mandates and regulations (68%), and lack of skilled job applicants (55%).
Of these factors, the uncertainty and unpredictability of legislative decision-making hindered the greatest number of business owners from making investments (20%), followed by the lack of skilled applicants (19%), and additional costs from state business mandates and regulations (18%). The critical factors driving profits are increased customer sales (58%), tax incentives and lower business costs (27%), and investments in workforce talent (15%).
The most important factors driving losses are the high costs of taxes, regulations, and mandates (80%); decreased sales and loss of customers (13%); and retiring workers and difficulty finding qualified workers (7%). Connecticut businesses are making their greatest investments in new technology (22%), employee training and other retention efforts (20%), property and facilities (16%), and recruiting new qualified workers (14%).
Fifty-two percent have no plans to sell their company, while almost one-fifth plan to sell within the next five years (18%). Seventeen percent are unsure or undecided about their plans to sell, and only 5% plan to sell within the next year.
Of those who plan to sell at some point, 59% plan to sell their firm through an asset sale. Seventeen percent will do so through a stock sale, 9% through a family member transfer, and just 6% through an employee stock ownership plan (9% reported other methods).
Half of those surveyed anticipate a transfer of ownership within the company, and 31% expect a transfer in the next five to 10 years. Fourteen percent are unsure or undecided about a possible transfer, and only 6% have plans to transfer ownership in the next year. 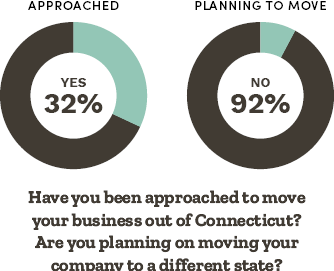 With a majority of businesses (61%) saying that up to 15% of their workforce will retire in the next two to five years, the time to recruit new workers is now.
Businesses are pursuing a variety of tactics to prepare for anticipated retirements. Leadership succession plans and increased recruitment efforts (both 53%) are the most popular methods being used to prepare for retirements, followed by ramping up internal job training programs for current employees (42%) and implementing older-worker retention options (23%), such as transitioning employees close to retirement age into part-time positions.

Nine percent identify other strategies, including downsizing or selling their business instead of replacing their workforce.
Businesses are looking to fill mostly mid-level (37%), line (28%), and entry-level (26%) positions next year.
Millennial and Generation-Z workers make up a significant portion of the Connecticut workforce; 83% of survey respondents employ people under 35 years old.
Of those, 25% say more than half of their workforce is under 35, while 31% report that a quarter to one-half of their employees are in that demographic. Almost half (44%) say that a quarter or less of their workforce is under 35.
Forty-one percent of businesses are somewhat satisfied with their younger workforce, while 20% are highly satisfied. An almost equal percentage of business leaders are dissatisfied (20%) or have neutral feelings (19%) toward younger workers.

Forty-three percent of businesses report having trouble finding and retaining young workers, while nearly a third report having no trouble (29%).
The primary challenges for finding young workers are competition from other employers offering higher wages and/or more expansive benefits (30%) and the high cost of living in the state (25%).
More than a quarter of those surveyed (26%) identified other difficulties in finding workers, most notably a lack of qualified candidates with a strong work ethic and the training necessary to meet job requirements.

The same reasons businesses are struggling to find workers are also identified as barriers to retaining young workers.
Nearly a third say higher wages and better benefits (32%) are motivating their young workforce to change employers or leave Connecticut altogether, while 26% cite the high cost of living in the state. Seventeen percent of respondents identified other reasons, most notably the lack of a strong work ethic.
The difficulties finding and retaining young workers impact wages and benefits. Most employers report offering higher wages and more comprehensive benefits to attract new employees (55%), while 36% report no impact on compensation.
Employers are taking various actions to attract and retain younger workers:

In recent years, both Democrats and Republicans in the state legislature have proposed tax incentives to encourage recent graduates of Connecticut colleges and universities to stay in the state.
One proposal gives recent graduates a five-year income tax break following graduation. Another proposal, “Learn Here, Live Here,” would allow in-state graduates to set aside a portion of their state income tax payments each year for10 years toward purchasing their first home; participation requires buying a home in Connecticut and living in it for at least five years.
Survey respondents are almost evenly split on these tax incentive proposals, with 49% supportive of the measures and 51% unsupportive.

Nearly a third of those surveyed export their goods or services (29%), down from 33% in last year’s survey.
Of those that export:

Of those exporting goods and services, a majority conduct business in Canada and Mexico (86%), followed by Western Europe (69%), East Asia and the Pacific (63%), and South America (41%).

Respondents say international markets with the greatest potential for their business are Canada and Mexico (89%), Western Europe (14%), East Asia and Pacific (12%), South America (7%), Eastern Europe (5%), and the Middle East and North Africa (5%).
Just 14% of businesses hire workers from foreign countries. Of those, 45% have difficulty recruiting and hiring internationally due to changing federal immigration regulations, while 55% were not affected by the regulations.

Eighty percent of those surveyed said their business would be impacted positively if the federal government implemented a 15% corporate tax rate or lowered personal income tax rates. Just 16% were neutral, while 5% disagreed.
Another executive order from the Trump administration addressed regulatory reform, proposing the elimination of at least two existing regulations for every new regulation.
Sixty-five percent of respondents agreed with the statement: “I have seen/expect to see a positive impact on my business as a result of the elimination of federal government regulations.” Twenty-two percent of respondents felt neutral towards this statement, while 12% disagreed.

State government spending grew 110% between 1995 and 2016, far outpacing the growth of household income, inflation, and Connecticut’s population.
State employee retirement benefits represent almost one-third of that spending, with pension costs soaring 128% in the last seven years. Connecticut’s unfunded pension liability is $68.4 billion, according to Stamford University’s Hoover Institution.
With the retirement fund in its worst fiscal shape in 30 years, several reform proposals could significantly reduce costs and create stability for future state employees, as advocated by some legislators and organizations such as the Connecticut Institute for the 21st Century and CBIA.

Although a union concession package was approved by the General Assembly in July, many reforms were not included in the package. These additional reforms should be adopted either through further negotiation or legislation.
Businesses were asked about their level of support for four proposals to reform the state employee retirement system, including: increasing the retirement age; ending early retirement plans and delaying medical coverage for early retirees; implementing a defined contribution plan for all new employees; and eliminating the use of overtime payments in pension calculations. A majority of businesses (75%) believe state mandated paid family and medical leave policy would have a negative effect on their business.

Twenty-one percent said paid FMLA mandate would have no effect, while just 4% said it would have a positive effect.
The paid FMLA proposal that failed during the 2017 legislative session applied to all Connecticut businesses and required at least 120 new state workers to run the program.
The state’s nonpartisan Office of Fiscal Analysis reported the proposal would cost taxpayers about $13.6 million the first year and another $18 million each subsequent year.

While business growth remained largely unchanged from last year, Connecticut companies are investing, developing new products, and expanding their workforce—all good signs for the future.
However, many challenges remain.
The state’s workforce is aging. Businesses have difficulty finding skilled workers. The state needs reliable, realistic, and sustainable fiscal practices that support investment and drive economic growth.
Other states continue to approach Connecticut companies, and for good reason. Our mix of innovative, world-class businesses will always attract the interest of competitor states. If Connecticut’s policymakers demonstrate consistency and predictability, however, efforts to lure companies from the state will be far less successful.
Connecticut has a strong foundation for sustained economic growth and job creation, but past actions by policymakers—including massive tax increases and costly mandates on businesses—have stood in the way of achieving those goals.
Policymakers must recognize our challenges and act aggressively to develop bold solutions, particularly when it comes to setting a fiscal course that makes Connecticut affordable for taxpayers and a leader in business investment, economic growth, job creation, and government efficiency.

In June 2017, CBIA mailed and emailed the 2017 Survey of Connecticut Businesses to approximately 6,400 top executives throughout the state.
We received 440 responses, for a response rate of 6.8% and a margin of error of +/-4.8. All figures are rounded to the nearest whole number and may not total exactly 100%.
Survey respondents have run their business and production operations in Connecticut for an average of 47 years.
The largest share of participating companies are family-owned (31%), privately-held (24%), and S corporations (24%). Business types also include incorporated (18%), LLC (12%), woman-owned (7%), veteran-owned (5%), publicly held (4%), minority-owned (2%), non-profit/municipal (2%), and foreign-owned (2%).